Turning humans into goo with his gun.

Torturing then killing any Autobots that he can find.

Bring the Decepticons to Earth to destroy the Autobots (all failed).

Dropkick is one of the two main antagonists of the 2018 sci-fi action movie Bumblebee. He is a Decepticon spy tasked with hunting down and killing the Autobots and alongside his partner Shatter.

He was voiced by Justin Theroux, who also played Tom Watson in The Girl on The Train, Lord Garmadon in The Lego Ninjago Movie, Leezar in Your Highness, and Seamus O'Grady in Charlie's Angels: Full Throttle.

Definitely more brutish of the two, unlike Shatter who is willing to manipulate and even prostrate should the situation requires it, Dropkick has no compunction displaying his annoyance having bowing down to humans and using torture, violence against those whom he sees as annoying and insignificant.

Alongside Shatter, Dropkick was assigned by Decepticon leader Megatron to wipe out Autobots, even after Megatron crash-landed on Earth after became frozen solid under the custody of Sector 7 when he failed to retrieve the Cube.

Dropkick was first seen with Shatter torturing the Autobot scout Cliffjumper in the rings of Saturn for the location of Optimus Prime, but Cliffjumper refuses to talk. It wasn't until they received a signal detailing the location Bumblebee, who is currently located in California as his homing beacon was accidentally activated by a teenager named Charlie Watson. Taking the opportunity, Shatter and Dropkick killed Cliffjumper before heading over to Earth, where they contacted Agent Jack Burns (head of Sector 7). Posing as peacekeepers, Shatter and Dropkick made a deal with Burns by claiming that Bumblebee is a war criminal and that he must be brought over to them as soon as possible. To that end, Burns had Dr. Powell to let the duo gain access to Earth's satellites in order to pinpoint Bumblebee's current location.

Shatter and Dropkick eventually manages to find Bumblebee after he accidentally caused a power surge in Charlie's neighborhood. With the opportunity at hand, they help Burns and his troop in capturing Bumblebee, much to Charlie's objections. While Charlie is sent home by Burns, Shatter and Dropkick interrogate Bumblebee through torture, but it wasn't until they learned that he received a message from Optimus Prime about making Earth their new refuge and protecting it from Decepticon forces. Upon seeing this, Shatter and Dropkick decided to summon their Decepticon allies to Earth, even killing Powell when he hears of this and warns Burns about it.

Leaving Bumblebee for dead, Shatter and Dropkick head over to a transmission tower next to a docking pier, where they utilized it in an attempt to signal incoming Decepticons to their location. Fortunately, Bumblebee is revived by Charlie and heads over to the tower to stop them, drawing their attention by firing his weapons at the tower. Dropkick is dispatched by an irritated Shatter to deal with Bumblebee leading to a brutal fight between the two. Eventually, Dropkick changes to his helicopter form and opens fire on Bumblebee who manages to snag his propellors with a chain. The Decepticon transforms back only to become further entangled in the chains which tighten to the point he is rendered immobilized. Even in this state, Dropkick taunts Bumblebee only for the Autobot to violently kill him by pulling the chain, tearing Dropkick apart before finally exploding. 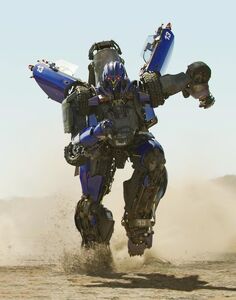 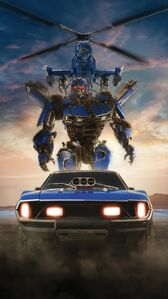 Retrieved from "https://villains.fandom.com/wiki/Dropkick?oldid=4370080"
Community content is available under CC-BY-SA unless otherwise noted.