Convince his brother to go back to villainy (formerly).

Dru Gru is the anti-villainous deuteragonist of Illumination's 8th feature film Despicable Me 3. He is an amateur supervillain and the twin brother of Felonious Gru.

Just like his twin brother, he was voiced by Steve Carell.

Dru looks almost identical to his brother. However, there are a few differences, most notably, he has a thick full head of blond hair while Gru is bald and has black eyebrows. Dru also wears prominently white clothes while Gru wears mostly black clothes. Just like Gru, Dru also has blue eyes.

Unlike Gru, Dru is shown to be a lot more happier and a bit hipper, hyper and full of energy whenever he gets excited, especially when he finally gets to meet Gru. He is also shown to be a bit clumsy and careless, which is why his father refused to teach him how to be a villain and had to turn to his brother for lessons. He often panics and also overacts when he is scared, as well as being uncooperative, disobedient and childish.

Dru is the twin brother of Gru and is incredibly wealthy. He strives to be a supervillain and to make his father (who sees him as a disappointment) to be proud of him. Despite his wide variety of gadgets, weapons, and many more things, Dru is a very incompetent supervillain and is rather clumsy and naïve as well, thus prompting his father to ask Gru to teach him. However, Dru instead attempts to convince Gru to go back to villainy, which he succeeds in, and Gru begins teaching him how to be a great villain just like their father was.

He also did appear as a rather kind and polite person towards his brother until he realized that his brother was just using him to get his old job back. The two of them have a fight about that Gru leaves in a huff. However, after Balthazar Bratt kidnaps Gru's daughters, Dru then chips in to help rescue them. The two brothers reconcile before the final battle against Bratt, and Dru almost gets himself killed trying to save Gru from Bratt's giant robot. He also watched Balthazar's show "Evil Bratt" when it was on air.

At the end of the movie, he and the minions steal Gru's ship as part of a family tradition. The ending credits show that Dru is seen robbing banks and Gru unsuccessfully trying to stop him. 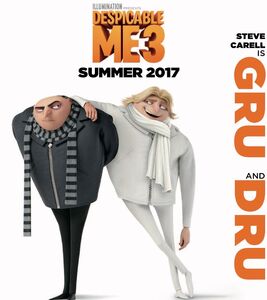 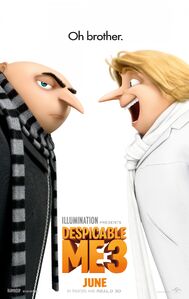 Dru convincing Gru to take a drive in their father's car.