Raya and the Last Dragon

Turn everyone to stone (partially succeeded).

The Druun are the main antagonists in Disney's 59th full-length animated feature film Raya and the Last Dragon. They are a race of mindless monsters and a plague that consume life, turning everyone they touch into stone.

The Druun take the form of amorphous, dark purple and black clouds.

The Druun are said to be a mindless plague that spreads like a relentless wildfire, consuming everything in their path until there is nothing left but ash and stone. They wander Kumandra and target any living creature they encounter, turning it into a statue. However, Druun appear to be afraid of and are repelled by both the Dragon Gem and water.

Five-hundred years ago, Kumandra was a prosperous land where the people lived harmoniously alongside. dragons. The dragons brought the people of Kumandra water, rain, and peace. Kumandra was a paradise, that is, until the Druun came. The Druun are said to have been born from human discord and have waited for a moment of weakness to attack. They are a plague that spread like wildfire, consuming everything and multiplying as they turned everyone they touched to stone. The dragons fought against the Druun for the people of Kumandra the best they could. Unfortunately, it was not enough and they were turned to stone as well. However, the last family of dragons (Pengu, Pranee, Jagan, Amba, and Sisu) managed to defeat the Druun. When cornered by the Druun and nearing defeat, Pengu had four of the five dragons in the family, including himself, combine their power into a gemstone and gave it to Sisu, before being turned to stone as well. Sisu would then use the Dragon Gem to blast the Druun away.

With the defeat of the Druun, a rainstorm came that returned everyone petrified by the Druun to normal, except for the dragons. Sisu fell into the water after using the Dragon Gem and floated downstream, remaining asleep at the end of one of a hundred different rivers.

Meanwhile, the Dragon Gem remained and humanity, who was supposed to become inspired and united by Sisu's sacrifice, instead chose to fight over possession of the Dragon Gem. Borders were drawn, Kumandra divided, and the humans separated into five different tribes (Fang, Heart, Spine, Talon, and Tail) all of whom became enemies with each other.

At some point, the Dragon Gem came into the possession of the Heart tribe who hid and guarded it within their territory.

Raya and the Last Dragon

Centuries passed, and the five tribes remained separate until Chief Benja of the Heart tribe invited the other tribes to a gathering in an attempt to peacefully reunify everyone into Kumandra again. Everything appeared to going well at the dinner, until the Fang Tribe attempted to seize the Dragon Gem. The other tribes arrived at the scene and four of them fought over the gem, accidentally breaking it.

With the Dragon Gem broken, the Druun returned and the tribes fled, each taking a piece of the broken gem with them when they realized it could still repel the Druun.

The Druun still continued their rampage throughout the land of Kumandra. Despite this, they were unable to cross over bodies of water, allowing numerous people of the five tribes to remain safe by staying close by or on top of it. It also led to Fang becoming the only tribe untouched by the Druun due to their land being cut off from the rest, through the use of an artificial canal.

However, that would change as when Sisu was accidentally killed by Namaari, causing the rivers to subside and dry out, leaving the Druun an opportunity to seize Fang; during the chaos, Raya and her allies then try to get the people out before collapsing into a pit and surrounded by them. Raya tells them that they need to put the pieces together, but her friends refuse to help Namaari. To show her faith, Raya puts her piece down and allows the Druun to take her. One by the one the rest follow with Namaari putting the pieces together and getting consumed by the Druun afterwards. The plan works and the Druun are blasted away again as everyone is brought back to life.

A Druun appearing before the Tribes.

The Druun surrounding Raya, Namaari, and the others. 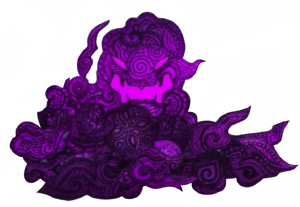