Kill Han Solo and his friends after attempting to betray the Crimson Dawn.

Obtain the coaxium generator for another great fortune (all failed).

Dryden Vos is one of the two main antagonists (the other being Tobias Beckett) of the 2018 sci-fi film Solo: A Star Wars Story, as well as a cameo antagonist in Season 7 of the 2008-2020 animated television show Star Wars: The Clone Wars.

He is the ruthless leader and crime lord of the Crimson Dawn, and a close ally-turned-nemesis for Tobias Beckett. During the film, he hires Beckett to steal the coaxium, but is later double-crossed.

He was portrayed by Paul Bettany, who also played Bill Cox in Firewall, Silas in The Da Vinci Code, and Gangster in Gangster No.1.

Dryden Vos was the leader of a powerful criminal organization called the Crimson Dawn. He was a close ally for the Galactic Empire, Darth Maul, and also for Tobias Beckett. He was firstly going to kill Beckett for his failure, but Han offered to create a coaxium generator instead of find one ready. Vos agreed, and promised to give them a huge amount of money in return. Han came with fake coaxium in a generator, and handed it to Vos, who was really impressed by Han for cheating him but was informed by Beckett about the plans to trick him and gain the money.

Dryden asks Qi'ra then what to do with a person which he trusts and then he (or she) betrays him. Qi'ra replies that he should sacrifice something beloved. He then orders to kill Han, as an act of her sacrificing her beloved man for him. However, Han revealed that he stole the real coaxium on time from The Cloud Raiders and insisted that it stays with him. Beckett then betrayed Vos, and stole both the coaxium and the money. Beckett was next going to sell the generator to a gang on Tatooine. Dryden offered Han Solo an alliance against Beckett to hunt him down together.

However, Solo disagreed. Dryden and Han fought, and in the middle of their battle, Qira attacked Han. Dryden explains that he trained her well and that she cannot leave him. However, Han tells her that she can leave, and that he knows she can. Qira then stabs Dryden Vos in the heart, and fights him until she manages to kill him.

Dryden is a tall, slender blonde-haired man with blue-eyes and facial disfigurement with scars all-around his face.

Dryden Vos is an arrogant, corrupt, scheming, nefarious, deceitful, malignant and ruthless crime lord who is well-known for his deception and luxurious lifestyle. He is shown to be egomaniacal and ambitious as well as being maniacal and vicious since he is willing to eliminate anyone. Through his agenda, Vos is obsessed with wealth and aesthetic. 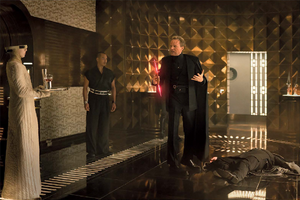 Vos stands over the corpse of an associate who displeased him. 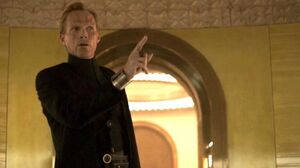 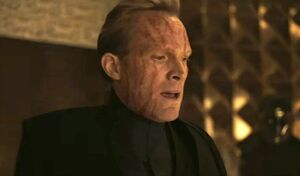 Vos speaks with Beckett and Solo 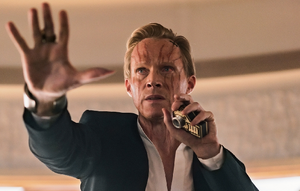 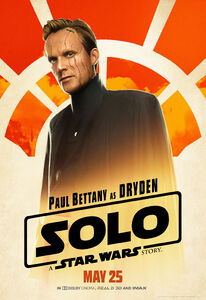 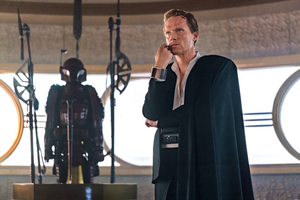 Retrieved from "https://villains.fandom.com/wiki/Dryden_Vos?oldid=3694308"
Community content is available under CC-BY-SA unless otherwise noted.