Paul is short, Gerard is tall and skinny with a mustache, Tommy is overweight with a goatee and sideburns, and Richard is also overweight and has a mustache.

The animal control officers appear near the beginning being called by hotel security about the animals; the lion named Alex, the zebra named Marty, the giraffe named Melman, and the hippopotamus named Gloria. DuBois' men pursue them in order to catch the animals, to mount their heads on the wall as trophies. They got seriously injured while chasing the animals with their boss in Monte Carlo. DuBois later healed them instantly simply by singing the French song "Non, je ne regrette rien", thereby appealing to their patriotism. They and DuBois hunt the animals into the Alps and later London. Before they could capture Alex, the penguins knock them out and shoot them (including DuBois) out of a cannon.

Later, DuBois and her men capture the four zoo animals, but the zookeepers incorrectly thank their boss for returning the animals back to the zoo. At the zoo, before Alex is nearly killed by a poisonous dart, Gia pulls him out of the way and the other circus animals come to the rescue. They are taken out by King Julien, Sonya and Manu and Maya. At the end of the film, they are last seen trapped in a crate by the penguins, being shipped to Madagascar thanks to. Whether they survive in Madagascar is completely unknown for this time, but it is likely that the humans released them after being discovered in their boxes. Later, they then returned to Monaco, but with a sad DuBois for not killing Alex. 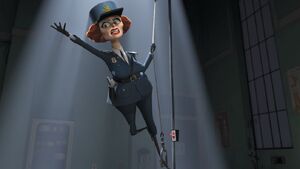 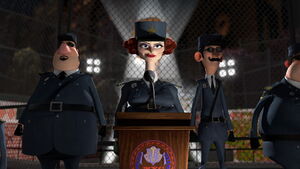 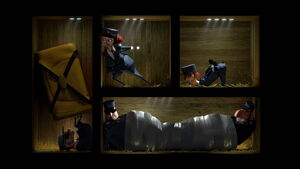