Duchess Morbucks (Miko Shirogane in the Japanese version) is a recurring villain from Powerpuff Girls Z, the anime version of The Powerpuff Girls. She is the older and more successful sister of Princess Morbucks.

She was voiced by Mariko Kouda in Japanese, and Chantal Strand in English.

In "Sleepless in New Townsville", Princess Morbucks caused a series of sleep-crimes in New Townsville, which were all fueled by jealousy of her older sister. Her parents admired everything Duchess did. Duchess was shown to be talented with playing the violin, cheerleading, and horseback riding. It was also explained that the reason for her absence from the Morbucks household was because she was sent to boarding school. The Powerpuff Girls stop Princess Morbucks, by giving her compliments. Once Princess was happy with herself, she no longer envied Duchess and went back to her normal self again, only committing diurnal crimes against the city.

In "The Mighty Morbucks", Duchess flies a jet plane back to New Townsville to visit her family. Despite previously being shown to hate her sister, Princess was portrayed as being super excited to see her sister return. When Duchess came back, Princess Morbucks told her all about The Powerpuff Girls and how much she hated them for being so much better than she was. When Duchess heard that someone was outshining a member of the Morbucks family, she was mad and felt the need to get revenge on them. So she and her sister teamed up to defeat The Powerpuff Girls.

Duchess needed to get more people in on her team for her plan to work, so she and Princess went to Mojo Jojo and bribed him with millions of dollars to get him to join them in their master plan to destroy The Powerpuff Girls. Mojo Jojo happily accepted, even though he knew full well that he was merely the pawn in this plan. He would gladly take the defeat of The Powerpuff Girls no matter what role he played.

Duchess paid a team of scientists to create a robotic suit for her that came equipped with all the powers of The Powerpuff Girls, only much stronger. Not to mention, the suit would look prettier too. She also paid a bunch of spies to locate where The Powerpuff Girls would end up being next. This is where she and Mojo Jojo planned on going to for their next and intended final attack on The Powerpuff Girls.

Mojo Jojo began attacking The Powerpuff Girls, as usual, using a giant robot suit. Also following in pattern, The Powerpuff Girls defeated Mojo Jojo. However, after their fight with Mojo was over, the girls were greeted with the new face of Duchess Morbucks. Duchess challenged the trio to a duel and when Buttercup called her bluff, she smashed her with a hammer. Bubbles tried to use her bubbles on her but Duchess had even bigger bubbles. Blossom tried to use her yo-yo but again, Duchess had a bigger one and she defeated all three of the girls.

Duchess summoned Mojo Jojo to come in and finish them off but all of a sudden, Duchess started attacking Mojo and defeating him, saving the lives of the very girls she endangered, much to the confusion of The Powerpuff Girls, Mojo Jojo, and Princess Morbucks.

When Duchess' visit home was over, she gave her sister one last goodbye and left on her jet plane, leaving all of her questions unanswered. All three of the confused parties watched the news that day and were surprised by what they saw. The news answered all of their questions when they saw that Duchess' act of heroism was getting maximum coverage, while her act of villainy went completely unmentioned. News outlets painted The Powerpuff Girls as being helpless weaklings, who couldn't handle Mojo's latest attack and who needed to be saved by the far superior superhero, Duchess. This brought The Powerpuff Girls to shame and made Princess Morbucks finally feel happy with herself, as now she couldn't really envy the girls, now that their names have been sullied. She learned that this was all part of her sister's plan and showed great thanks for it. 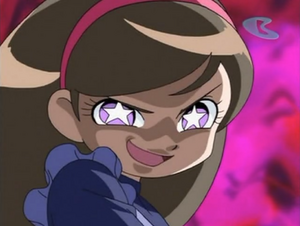 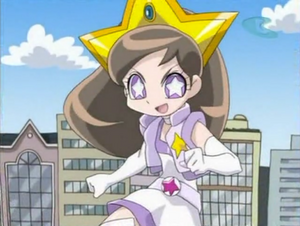 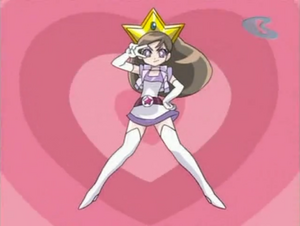