Duchess Swan Is the daughter of Odette, the Swan Queen, and the central antagonist of the 2013 TV series Ever After High.

She was voiced by Stephanie Sheh.

Duchess Swan believes something's going on between Ashlynn and Hunter and doesn't know what so she decides to find proof for everyone to know that, thus she makes an alliance with Sparrow Hood to help her catch Hunter and Ashlynn in secret relationship.

She finally got them by seeing them on a romantic picnic. She wanted to tell everyone about them but they revealed themselves instead. She can turn into a black swan but wishes to be a white swan instead and revert to her human form.

She tries to entrap Cupid and the others during the True Heart Day but fails by mistakenly getting the headmaster to the school without knowing the party was in Ever After village.

Duchess Sawn, like Briar, is royality with doubts. Her story has a tragic ending, which makes her bitter and envious of those with happy endings. Though any princess can become the target of her frustration, Apple White is whom she regards as her main opponent, either because Apple has the best Happily Ever After, or because she is destined to share it with Daring Charming, whom Duchess has a big crush on. She also looks down on Raven Queen, who is perhaps the only princess with a fate as bad as hers, and she is furious about Ashlynn Ella getting the best of both worlds.

She is vindictive and spiteful about her ending, and willing to risk any chance at companionship with her fellow students to get a better one. She appears to think that if she is able to get one of them to give up or lose their Happily Ever After, she can take the ending for herself. However is like Robbie Rotten from the TV show Lazy Town.

Duchess has light olive skin, brown eyes, and long black hair, streaked with white and mauve. She wears dark eyeshadow and red lipstick. She has inherited her mother's ability to turn into a swan, but she has black plumage.

Duchess is the daughter of Odette, the Swan Queen.

Duchess doesn't have many friends due to her hostility. She considers fellow Royal Faybelle Thorn as her best and closest friend, while Sparrow Hood seems to be more of an accomplice when she's up to some mischief. Outside of that Duchess only mingles with fellow royalty.

Duchess's swan, Pirouette, wakes her (and her roommate Lizzie Hearts) up every morning.

Duchess has a huge crush on Daring Charming, but the feeling is not mutual. Because of this, Daring's aloof nature often causes her distress. 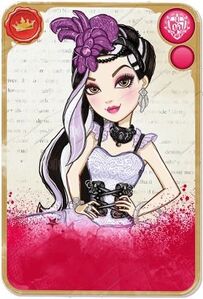 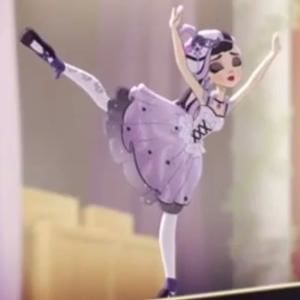 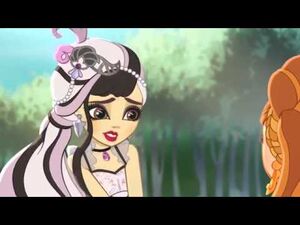