Sell Pyra to Bana for a load of cash.

Dughall is a minor antagonist in Xenoblade Chronicles 2. He is the corrupt and greedy bureaucrat of the Empire of Mor Ardain stationed on the Torigoth colony on Gormott. He is the driver of Dolmes.

He was voiced by Keiji Hirai in the Japanese version, and by Callum O'Neil in the English version.

In Chapter 2, Dughall was first contacted by Bana, alerting him that the Aegis made her escape on Azurda towards Gormott. When Rex and Nia arrive at Torigoth, Dughall sends Ardainian soldiers after them, with Brighid coming to assist them. Nia and Dromarch are captured while Rex and Pyra make their escape with the help of Tora. As Captain Padraig reports this to Dughall, he immediately becomes outraged that they failed to capture the Aegis alongside them. Once Special Inquisitor Mòrag arrives on the Titan Battleship, Dughall becomes afraid that if she finds the Aegis first, then he would be unable to sell Pyra to Bana. After Mòrag takes Nia to the Titan Battleship to be transferred to Mor Ardain, Dughall then calls Padraig to double the guards of the ship, planning to lure the Aegis and her friends to the battleship, unaware that Brighid was eavesdropping outside.

After Rex, Pyra, Tora, and Poppi infiltrate the Titan Battleship to rescue Nia and Dromarch, Dughall intercepts them with Dolmes when they reach the Hanger leading to the Torigoth Relay Base. Dughall reveals his plan to obtain Pyra before Mòrag can for his wealth, and hides behind Dolmes to use him as a meatshield as Blades can regenerate from any wounds. Nia calls him out for the pain that the Blades must endure, but Dughall does not care for Blades' feelings and orders Dolmes to deliver pain on the group. Once they defeat him, Dughall laments how he was unable to return triumphantly to Mor Ardain before falling unconscious.

Dughall is a greedy person who cares little about others, feeling no care towards the feelings of Dolmes or any other Blades. He has little tolerance for those he deems as idiots, as seen by insulting Captain Padraig being unable to decide what color emerald is. According to Edgar, the Gormotti Chief of Torigoth, while Dughall was selfish and unpopular, he is still a capable administer. 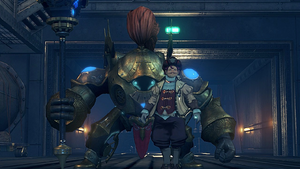 Dughall with his Blade, Dolmes.
Add a photo to this gallery

Retrieved from "https://villains.fandom.com/wiki/Dughall?oldid=4114159"
Community content is available under CC-BY-SA unless otherwise noted.