He was voiced by Takehiro Murozono.

Dugon Manattee made his first appearance at the boat yard where he notice the arrival of Lupin Blue and Lupin Yellow he tried his best to ask them to have mercy on him, but that didn't so he used the treasure's ability to make the battle area a bit foggy giving him the advantage in the fight against the two after that he fired his beam on the two causing them to be ridiculous worry about Kairi. After that he then left the scene.

He later appeared at the factory where Noel confirmed his suspicion about Dugon's natural ability causing the others into worry warts. After that he then battle Lupin Red and Lupin X he tried to use the treasure's ability to conceal himself, but Super Lupin Red blows the fog away. During the fight Lupin Red gained access to Dugon's safe (which his password is 1-0-5) and got La fumée sur l’eau (which translate as "Smoke on the Water") Spearhead. After he was then taken out by Super Lupin Red and X thus reverting the spell that he puts on Lupin Blue and Yellow.

However thanks to Goche Ru Medou she then enlarged him as he battle X Emperor Slash and Lupin Magnum he managed to dodge X Emperor's finisher, but Lupin Kaiser Magic used a bit of magic on Dugon causing him to do a quiz on which of these Lupin Kaiser is the odd one out. He figured out that the Siren Lupin Kaiser's arm is a bit different and he received a prize which is ironic because he was the said prize. After that he was then destroyed by this finisher called GoodStriker: Smack 'Em Down Kick. 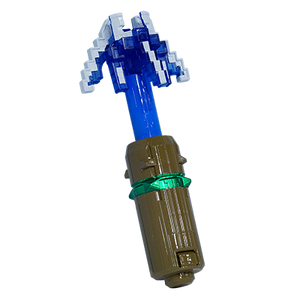