Get his cane back from Missi.

He is a vampire inhabiting a castle in which the majority of the story takes place, and reappears in the other two clips within the Vampair series by Daria, Land of the Dead, and Fuck You.

Duke is first seen in silhouette, dressing in eveningwear, as a brunette girl (Missi) walks into a castle to supposedly read a copy of Twilight. Duke comes into his entrance hall and finds her. He taunts her, destroys her book and locks her in when she tries to escape. He then uses his cane to change her clothing into a dark velvet dress and pulls her to him. He next strings her up like a marionette and makes her dance before she effects her escape. Undeterred (but annoyed) Duke gives chase and corners her at the door. As he dances with her, Missi notices sunlight from behind the curtains in the hallway. She uses seduction to lure him towards the rope that opens said curtains when pulled. She opens the curtains, and hits him into the light with his own cane. The exposure turns him to dust, and Missi is possessed by the cane as she holds it, turning her into a vampire too.

Ch.2 Land of the Dead

In Daria's next music video in the series, titled Land of the Dead, Duke is shown to have become the overlord of the underworld in his "death." The video takes the form of a tour of his new domain, showing the mythical creatures and monsters that serve as his servants, the location of his new home and the Gothic furnishings of that home. He is presented as to being content within his new "life", but the end of the video implies that Missi is planning to resurrect him and bring him back to her world.

In Fuck You, also titled "Chapter 3: Resurrection", Duke is resurrected from his new life in the underworld by Missi, who is now in possession of both his cane and his castle. She taunts him, abuses him, and kicks him out of what used to be his home, into the rain, much to his annoyance.

In Chapter 3.5 Duke stands outside his castle and bitterly glares at Missi who is inside. At the end of the video a poster flies into Duke's face with the words: "Playing Near You: The Showdown" the poster also shows two people (a male and a female) dancing together. Many fans believe that this means that in Chapter 4 Duke will challenge Missi to a sort of dancing competition to steal his cane back. In the Christmas Sticker Live stream, Daria Cohen described Missi as being OP (overpowered) and said that she would be less OP after Chapter 4 possibly alluding to Duke successfully stealing his cane back.

In Chapter 4, Duke is alluded to and seen as a picture which Missi angrily destroys during her descent into madness, before later appearing outside the window of his castle considering whether or not to challenge Missi. Upon seeing him, Missi (who had given up the cane after realizing how mad she's become) reignites her passionate hatred for him and ignores her previous decision to give up the cane, before becoming a vampire again. Later, Duke leaves the dance-challenge flier outside her door despite not appearing, but ultimately Missi accepts this.

In Chapter 5, some time after challenging Missi, Duke wanders around aimlessly wishing for a date until he passes a graveyard with a sign offering directions to the nearest stripper. Duke enters but to his surprise he finds a zombified prostitute. Although at first a little disgusted and uncomfortable with her decaying body, Duke sleeps with her anyway and unexpectedly enjoys it, before going to find another one-night stand. The girl he chooses to sleep with next is a girl named Venssa, who was wandering around looking for Missi (who has been declared missing since she went into Duke's castle). He and Venessa almost have sex, until the tip of his genitals break off due to his previous rendezvous with the zombie prostitute, so he leaves it with a confused Venessa and disappears behind a tomb. The sign he leaves asks to not be disturbed until the showdown on Friday, alluding to his challenge with Missi.

In Chapter 6, the day of the challenge arrives, and Duke and Missi arrive at the night club to battle it out for the possession of the cane. At first, they dance along to the music, coyly playing with each other to win, until they stop for a drink. Then, Duke pulls out a poison to put into Missi's drink, intending to finish her off, but Missi, aware of his plan, rejects the drink. Infuriated with her un-cooperation, Duke attempts to murder Missi physically this time, but Missi refuses to back down and fights back. The two battle each other violently, until eventually Duke stabs Missi in her eye and Missi cuts off Duke's thumb. Finally, they surrender to each other, tired and in shock from the fight. In the aftermath drawn by Daria Cohen, it is shown that while Missi regretfully looks at the ground as she covers her now gouged-out eye, Duke angrily glares at his hand, in the spot where his thumb used to be. This hints both Missi and Duke are embarrassed and regretful about their fighting, for it has now cost them heavily.

Ch. 7 The Finale: Stuck With You

For an undetermined amount of time (although presumably years after the showdown), both Missi and Duke live together in their castle, now married and bickering like an old couple. Neither of them can stand the other's tendencies and constantly argue with each other throughout the episode, lamenting about their miserable marriage. They both still have their scars from the showdown, such as Duke wearing a wrapped bandage around his hand and detached thumb. Both Duke and Missi attempt to murder each other in one of their fights, but in the end, they both end up in separate coffins next to each other buried beneath their graves. How they got there and how they (apparently) died is left unknown, but as they lie there, Duke considers how he'd rather be with Missi than alone in the grave. They then reconcile and cuddle with each other, while the Season 1 finale ends there.

Duke is gleefully evil. He enjoys playing with his intended victims and shows very little empathy for those who suffer because of him. This is seen during his song in "The Land of the Dead, where he unconcernedly steps on the heads of several of his skeleton butlers.

Daria has confirmed that Duke is attracted to both men and women, but for different reasons. While he desires women he never drinks their blood, because according to him:

Duke is perhaps less intelligent than Missi, as seen when he was fooled by an obvious trick by her in "The Night" when she appeared to seduce him to lure him into a trap.

Duke is a long, thin man (his general appearance is shaped somewhat like a coffin) with sharp features. In both The Night and Fuck You, he wears a black suit and cape - the inside of the cape being red - and a black hat with a red stripe around it. His cape is held in place with a Voltaire key pendant in a manner similar to a brooch. In Land of the Dead, his outfit changes to be a more colorful variation, a dark pink and red based design with gold accents. He also carries a new cane modeled after a two-pronged pitchfork, appropriate for a lord of Hell.

Most of the powers Duke has displayed were tied to his cane. Upon realizing he didn't have it when he was resurrected he had a brief moment of panic. These powers include:

However Daria has confirmed that Duke doesn't need the cane for most of his powers, but it serves as his security blanket.

In addition to the powers given by the cane, Duke presumably has all of the powers of a vampire, some of which he has already displayed, including:

Duke closely resembles Voltaire. This is because he was modeled after the performer's early appearances on his album "Almost Human". Many things about him and his possessions are modeled after Voltaire:

In "Resurrection", the connection between Voltaire and Duke was made explicitly, with Missi pointing to a picture of the famous musician and claiming he was Duke's father. Whether this is true in the world of the Vampair or a joke is unknown.

Duke's design is characterized by long straight shapes, unlike Missi, who is shorter and generally composed of round shapes. Duke's elongted features were inspired by Daria's art teacher who claimed that Duke looked like a guy she would have known in High School. Because of Duke's cartoonish characteristics he is difficult to draw in certain frames. For example, his nose looks odd when seen straight-on, and his pointed chin is best suited for smiling, else Daria has to add on dimension to allow him to make other expressions.

The origin of Duke's name comes from the movie Rockadoodle, which Daria saw as a child. The main villain, The Grand Duke introduced himself as "The Duke", which Daria thought to be a cool name. This combined with the lyrics of Voltaire's Vampire Club song provided the inspiration for the character's name and general aesthetic. 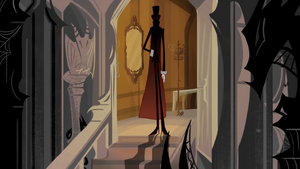 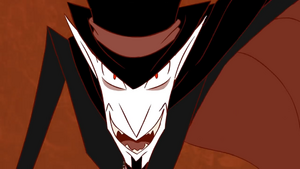 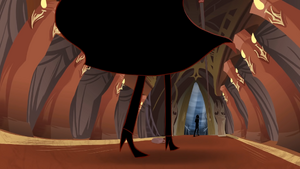 Duke walks towards the girl 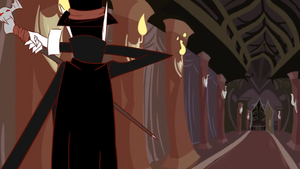 Duke using Pyrokinesis to light the room up 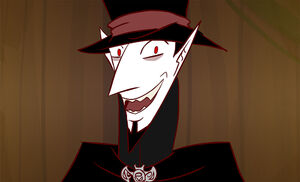 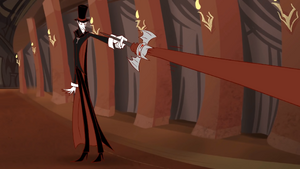 Duke using his cane to grab the girl 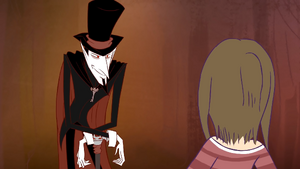 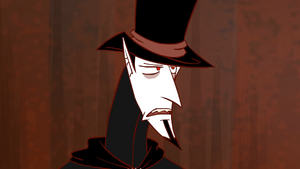 Duke sighs as he has to chase down the girl 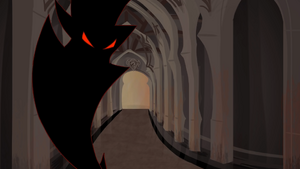 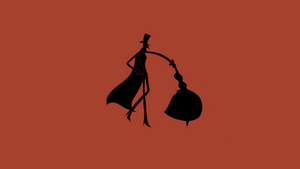 Duke dancing with the girl 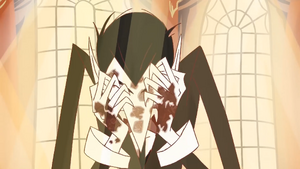 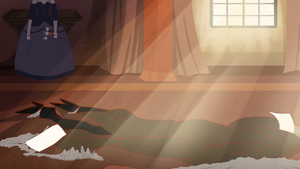 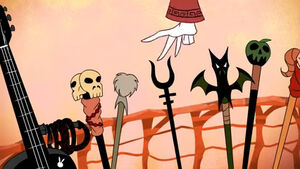 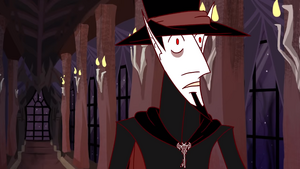 The Duke returning in his castle in the music chapter "Fuck You". 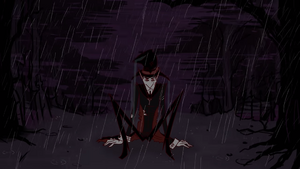 The Duke's defeat being kicked out of his home by Missi having given him a "lesson by his own medicine". 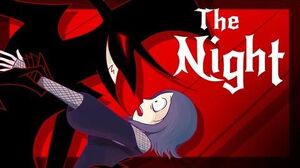 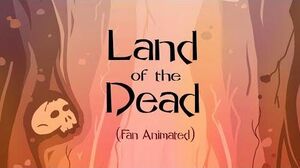 Land of The Dead (Fan Animated) 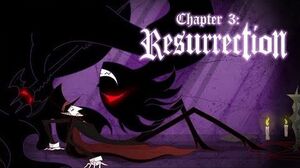 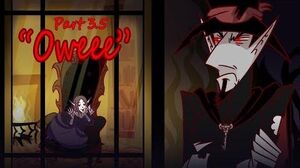 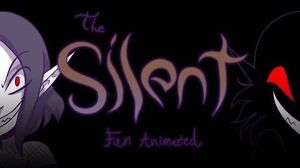 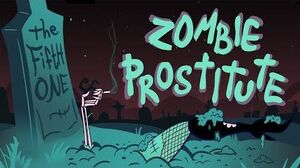 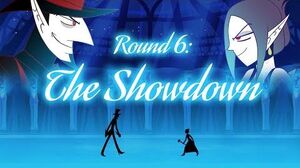 Round 6 The Showdown (Fan Animated)