Duke Sigmund Igthorn is the main antagonist of Disney's Gummi Bears and was a renegade noble who sought to take over the world with his army of ogres - he also wanted to use the power of gummi berry juice to aid him in this quest, as the juice gave humans superhuman strength.

Often referred to as "Dukie" by his minions he was short-tempered, power hungry and extremely unpleasant towards almost everyone - he was even cruel to his own minions, ruling over them in the style of a tyrant or dictator: depending on his mood (which, as mentioned above, was almost always bad).

Prior to becoming the ruler of his own band of ogres Duke Sigmund Igthorn was one of the greatest knights in Dunwyn but plotted to overthrow the honorable King Gregor and was cast out as a result - forcing him to take refuge in Castle Drekmore, where he and his faithful Ogres remain to this day. He spent most of the series trying to conquer Dunwyn, but always failed and foiled by the Gummi Bears.

Duke Sigmund was the archenemy of the Gummi Bears and was the antagonist with the most encounters in the show, he is also the one who ultimately succeeded in destroying Gummi Glen in the later series, which marked a change in tone as his plans had up until that point largely met with failure (though, of course, he ultimately lost even this victory).

Finnaly, Duke Sigmund Igthorn check apparreance of cameo of the Darkwing Duck's Episode: In Like Blunt. 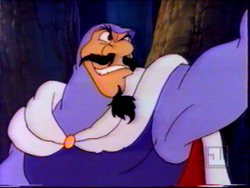 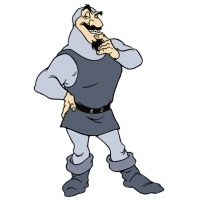 Retrieved from "https://villains.fandom.com/wiki/Duke_Sigmund_Igthorn?oldid=3797347"
Community content is available under CC-BY-SA unless otherwise noted.