Duke of Bootleg (by Nick Wilde)

Duke Weaselton is a supporting antagonist in Disney's 55th full-length animated feature film Zootopia. He is a weasel crook hired by Dawn Bellwether to capture the Night Howlers.

He was voiced by Alan Tudyk, who also played Lenny in Ice Age, King Candy in Wreck-It Ralph, the Duke of Weselton in Frozen, Alistair Krei in Big Hero 6, Van Wayne in Powerless, Ludo in Star vs. the Forces of Evil, Iago in the 2019 live-action remake of Aladdin, and Todd/Hushfluffles in Final Space.

As his name suggests, Weaselton is extremely snide, greedy, conniving, manipulative and traitorous, as he is perfectly willing to betray others or engage in illegal activities for a few bucks more. However, compared to Dawn Bellwether and Mayor Lionheart, Weaselton's crimes are considerably more small time and the worst action he commits are bootlegging and petty theft, making him more of a delinquent crook than an intellectual mastermind. He does not seem to engage in dangerous activities, but stole poisonous flowers to assist his employer's goals solely because he was promising money, which he himself claims is the one thing that he cannot refuse.

Weaselton is shown to have a dry and insulting sense of humor, referring to Judy Hopps in degrading and discreditable terms throughout their chase such as "cottontail" and telling her to "have a doughnut" while kicking a large doughnut in her path as a reference towards the stereotypes of cops loving doughnuts. He carries himself in a prideful and egotistical manner, correcting Judy when she mispronounced his name. Like most criminals, Weaselton is strongly hateful and disagreeable towards police officers, as he said nothing to Judy about the case she was working on and chastised Nick and Mr. Big simply for helping a cop.

It is also implied that he is a cowardly and pusillanimous animal, shown by the way he frantically and rather desperately ran away when he was being chased by Judy throughout Little Rodentia. However, this may be false, as he found the courage to continually gloat towards Judy when he had the upper hand or seemingly lost her, but this trait only surfaces when he is specifically certain he is authoritative and superior in a situation. He is defiant and uncooperative to Mr. Big for working with a cop, even going so far as to call him a "dirty rat", despite the fact that he was being frightened with death at the time by the crime boss.

Duke is first seen robbing "moldy onions" from a shop and fleeing the scene past a depressed Judy Hopps. When she is alerted to the robbery, she promptly pursues him. He flees into Little Rodentia with Judy on his trail and causes chaos in the process by kicking a donut statue, nearly killing a shrew named Fru Fru. However, Judy saves Fru Fru and apprehends Duke, sending him off to the Zootopia Police Department. Unfortunately, Judy is reprimanded for acting outside her duties as a meter maid, thus Duke gets released on a technicality.

As panic against predators arose in Zootopia following the arrest of Mayor Leodore Lionheart, Judy realizes that the onions Duke stole were really night howler bulbs; a flower that can make any mammal go savage and induce almost instant aggression. Together with her partner Nick Wilde, she confronts Duke, who is selling bootleg versions of Disney films to passersby, about his actions. When Duke refuses to talk, Judy and Nick bring him to the notorious crime lord Mr. Big, who happens to be Fru Fru's father. Upon learning about the donut incident that almost killed Fru Fru, Mr. Big threatens to ice Duke unless he tells everything to Judy and Nick. Eventually, Duke fearfully confesses that he planned on selling the flowers to a ram named Doug Ramses for a good deal of money; which he says is the one thing that he can't refuse. Duke also informs them that Doug has a lab hidden in an abandoned subway station where he harvests lots of night howlers for his ambition, and warns them that Doug is the complete opposite of friendly; he is unfriendly.

Judy and Nick find the lab and realize that Duke is telling the truth about the lab. They soon discover that Doug has been using the night howlers to produce a serum as part of a conspiracy to turn Zootopia's prey population against its predator population, all engineered by current Mayor Dawn Bellwether. It was revealed that Bellwether the one who hired Duke to take the Night Howlers instead of Doug.

Near the end of the film following the arrest of Bellwether and her accomplices, a reformed Duke is last seen dancing to Gazelle's "Try Everything" at a concert, swiping some money before sneaking away. 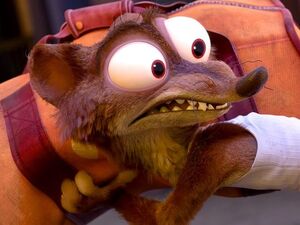