PAW Patrol: Jet to the Rescue

Obtain gems of Barkingburg and Flappington to found out and later harness their power Use the gem to re-build Barkingburg in skies and become ruler of it (both succeeded; later failed)
Make sure, his sister won’t have any more royalty (failed/ongoing)
Defeat Skye and her friends (failed)

The Duke of Flappington is the main antagonist of the TV movie PAW Patrol: Jet to the Rescue.

He is a greedy royal duke who wants to be a king and steals a magic staff to make thing fly and flies a giant eagle ship with his pet/henchmen Jean Claude and become king of the skies. He is also the archenemy of Skye.

He is voiced by Ashton Frank.

In the PAW Patrol hour-long special "Jet to the Rescue", the Duke is in Barkingburg attending the birthday party for his cousin, the Princess of Barkingburg. However, he is really there to attain the Gem of Barkingburg, which when combined with the Gem of Flappington, will grant him immense power. To that end, Sweetie offers to ally with him to acquire it. While the Duke distracts the PAW Patrol, his cousin, and the Earl Sweetie steals the gem. After managing to trap everyone except for Skye, Everest, and Tracker in an old storage room on the lower levels of the castle, Sweetie hands the gem over to the Duke after requesting he call her "Queen Sweetie", but once the gems are combined and affixed to a scepter, the Duke and Sweetie discover the combined gems have the power to make things levitate, and that's when the Duke reveals his true colors and betrays Sweetie, dropping her and Busby in the castle moat while he heads up to board his personal Eagle Jet to overlook his kingdom in the sky, dubbing himself "King of the Sky".

As he continues lifting various parts of Barkingburg into the air, he is initially unaware of when Skye, Tracker, and Everest approach him in their jets. Unfortunately for the pups, Skye's fear of eagles causes her to blow their cover, the Duke picks them up on radar, and captures Everest and Tracker. Skye tries to take the scepter on her own, but Jean-Clawed reclaims it while Skye crashes into the ground, becoming demoralized and disheartened at how her fear of eagles have made things worse.

The Duke then moves to lift Barkingburg Castle into the air, but this proves to be his first mistake, as Sweetie, horrified to see her Princess in mortal danger, returns out of loyalty to the Princess, and blocks the beam from the scepter, leaving her own jet and Busby to be affected instead while the castle drops safely back into its foundation, much to the Duke's fury at Sweetie defying him to save his cousin and her owner. As a result, Sweetie's display restores Skye's self-confidence, and once the rest of the PAW Patrol join her, they make quick work of the Duke's Eagle Drones, and Skye frees Everest and Tracker, while also knocking out Jean-Clawed. With his plans falling apart, the Duke becomes desperate, and decides to destroy Barkingburg Castle using Big Benji the clock tower to do so. However, while he is busy gloating at his impending victory, Skye retrieves the scepter while his guard is lowered, stops Big Benji, and saves Barkingburg Castle.

With his plans ruined, the Duke decides to flee, but Skye pursues him. In desperation, the Duke has Jean-Clawed push the engines of the Eagle Jet to full power, but the strain is too much for the Eagle Jet, and the engines soon shut down from overheating. Skye catches the Eagle Jet, but risks burning up her own engines when they start to overheat and go critical from the stress of holding up the larger aircraft, but manages to land it safely on the ground. As the Duke is relieved to be on solid ground again, he is soon surrounded by the PAW Patrol, led by a very angry Ryder. Trying to downplay his actions, the Duke tries to head home to Flappington on foot, but Skye grabs him in her harness and takes him back to the castle to face punishment from the Princess.

Although the Duke tries to say his intentions were a harmless birthday prank, Sweetie seals his fate by revealing when he formed the alliance with her and says the Duke tried to turn her against the Princess. Skye is convinced that's all they need to know, and the Duke and Jean-Clawed are punished by the Princess with doing menial chores around the castle, overseen by the Duke with a long list of what needs to be done, much to chagrin of the two.

Starting with this first episode of the Rescue Knights series of PAW Patrol, he made an alliance with Claw, a former Knight of Barkingburg, who could help the Duke become King with the aid of his dragon Sparks. 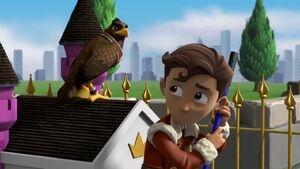 The Duke of Flappington's defeat as he and Jean Claude look at each other in humiliation that they're gonna be stuck cleaning the moat for a while.