The Duke of St. Carta

Summon demons into the world.

The Duke of St. Carta is the posthumous overarching antagonist of The Conjuring franchise, specifically appearing as the posthumous overarching antagonist of The Conjuring 2, The Nun and the upcoming The Crooked Man spinoff. He was a satanic worshipper who built and lived in the castle that would eventually become the Cârța Monastery, and is the one responsible for summoning the demon spirit Valak into the world.

He was portrayed by Mark Steger.

The Duke was a powerful and wealthy aristocrat living in Transylvania, Romania in the 1100s. He used his immense wealth and power to build a castle for himself, where he lived in and used as his lair. The Duke was also obsessed with the occult, and was fascinated by the potential power that demonic worship and summoning could provide him.

After a long time of studying demons, the Duke decided that he would summon Valak. He performed a dark satanic ritual that involved kidnapping and ritualistically sacrificing five people, opening a rift in the castle's catacombs that the demon emerged from. However, his plans were discovered by a group of Christian crusaders, who burst in and interrupted the ritual. They gagged the Duke and arrested him, then used a relic containing the physical blood of Jesus Christ to seal the rift before Valak could escape. The Duke was taken away, and was presumably imprisoned and died incarcerated.

The castle was seized by the Catholic church, who transformed it into the Cârța Monastery in 1202. However, hundreds of years later during the 1940s, the castle grounds were bombed by the Nazi Party during World War II. The bombings damaged much of the castle, including reopening the rift and releasing Valak. The nuns of the monastery had no choice but to take shifts praying all day and all night to keep the demon at bay, though this would eventually fail. 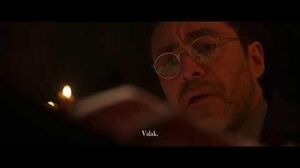 The Nun - Valak, the history of the abbey (Abbey of St. Carta Romania) EngSub