The Duke of Weselton

Lying.
Terrorizing and manipulating others.

Rid Arendelle of Elsa to bring back summer.

Exploit the kingdom's tradable goods and riches (both failed).

He is the conniving, egotistical and manipulative Duke of one of Arendelle's neighboring kingdoms, Weselton, and seeks to exploit Arendelle's goods for his own benefit. He has two guards at his disposal named Erik and Francis, willing to assist him in whatever he needs. However, the Duke ends up being played by a far greater threat, Prince Hans.

He was voiced by Alan Tudyk, who also played Lenny in Ice Age, Turbo/King Candy in Disney's Wreck-It Ralph, Duke Weaselton in Disney's Zootopia, Ludo in Disney's Star vs. the Forces of Evil, Van Wayne, Alistair Krei in Disney's Big Hero 6 and Big Hero 6: The Series, The Joker in Harley Quinn, and Iago in the 2019 live action Aladdin film. In Once Upon a Time, the younger version of the Duke was portrayed by Jonathan Runyon. In the musical, he was portrayed by Robert Creighton.

The Duke of Weselton is a very pompous, obnoxious, paranoid and greedy man, though it is portrayed in a humorous manner throughout the film. Though he is invited to Arendelle for the coronation of Queen Elsa, the Duke was far more interested in exploiting Arendelle's tradable goods, as he is the representative of Weselton, Arendelle's former trade partner.

He is also extremely interested in Arendelle's history, wanting to know why the castle gates were locked for so many years, and why castle grounds were off limits to outsiders, showing a nosy side of the dignitary. The Duke is a very greedy, arrogant, possessive and bold-faced person who mostly wants for himself and could care less about others.

The Duke's most striking trait is his cowardliness and irrational attitude. Whenever even the slightest oddity occurs, he will go into a panic, relying on his bodyguard brutes to protect him.

He also has a hatred of magic and "sorcery", reason being he finds it to be highly dangerous and manipulative, explaining why he was so hostile towards Elsa after her powers were revealed at the coronation ball.

His fear of magic and the mysterious power that it holds is what leads him to perform his only immoral act, which was ordering his thugs to find and kill Elsa, hoping her death would result in the eternal winter curse that she accidentally caused to be lifted.

However, despite his flaws, the Duke is in no way heartless or evil, and actually does have a heart to some degree. He is also shown to care for the safety of others, besides himself, as seen when Prince Hans claimed Princess Anna was killed by Elsa, the Duke finding the news to be immensely shocking, especially considering the princesses' family ties.

This can also be seen again during the chase sequence at the coronation party, where the Duke held a distraught expression as Elsa ran into the crowds in the castle courtyard, likely showing concern for the vulnerable citizens living in Arendelle. Not only that, his negative actions can be considered satisfactory and justifiable, as they were performed out of complete fear.

His claims that Elsa was a monster were a result of him nearly being killed by her magic and his conspiracy to have Elsa assassinated was for the purpose of ending winter (as he assumed that was the only way).

What the Duke of Weselton lacks in stature, he makes up for in arrogance and showboating. He's determined to get close to the new queen - that is, until Elsa's magical secret to control snow and ice is revealed. He's the first to call her a monster and try to turn her own kingdom against her - anything that might help him exploit Arendelle's tradable goods.

The Duke of Weselton is first seen with his bodyguards Erik and Francis entering Arendelle and nearing the castle gates. The greedy royal proves to be extremely excited, deeming Arendelle his most mysterious trade partner, and that he greatly looks forward to unlocking its secrets and exploiting its riches. However, he accidentally says this out loud to his guards. Along with the other dignitaries, the Duke attends Elsa's crowning coronation as well as the ball thrown in honor of her first night as queen.

Anna and Elsa's majordomo Kai introduces the snooty duke, which is when the short royal offers Elsa her first dance as queen, claiming he should have the honor being their closest partner in trade. Elsa rejects the offer politely, but volunteers Anna, to which the Duke agrees to nonetheless. Though he believes otherwise, he's a terrible dancer, constantly stepping on Anna's toes and making a complete fool out of himself. The entire event was merely a chance to become closer to the two princesses, hoping a close relationship would further enhance his trading business with Arendelle. In the middle of his routine, he questions the princess as to why the castle gates were closed for so many years, to which she nervously claims ignorance on the situation.

Not too long after the comedic scene, Anna and Elsa get into an argument, and the drama causes Elsa's secret power over ice and snow to be revealed. The fearful Duke calls her out, claiming it to be dark magic/sorcery, and orders his men to capture her the moment she flees, though he and his goons were nearly killed by an accidental blast caused by the queen, resulting in the Duke calling her out as a monster. Anna, the visiting Prince Hans, and the Duke follow after the queen, who escapes into the mountains, accidentally casting a powerful curse over Arendelle, putting it into an eternal winter.

It begins to snow eerily throughout the land, causing the citizens to worry, though the Duke immediately becomes irrational, panicking, albeit humorously. He then suspects Anna to have powers as well, but the princess denies and explains that Elsa means no harm. The stubborn Duke finds it hard to believe, as she nearly killed him with her magic during the chase. However, to free the land from the curse, Anna volunteers to go after the queen. The Duke immediately agrees, but her fiancé Prince Hans was not too fond of the idea. Nevertheless, Anna departs and leaves Hans in charge.

Later on, back in Arendelle, things have become worse with the snow having become ice, freezing the entire kingdom, and the living conditions become unbearable for the citizens as, due to the curse overcoming the land in the middle of summer, no one is prepared for the harsh winter weather that's arrived. Hans and the royal guards are busy giving away free cloaks and other necessities for the kingdom's inhabitants who are struggling to survive, much to the Duke's dismay.

The Duke scolds Hans on his actions, not wanting the prince giving away any of Arendelle's tradable goods instead of taking action against Elsa, believing Anna's merely conspiring with her to doom the land. However, the Duke is soon forced to silence himself when Hans snaps at him, threatening the Duke with his power to have him arrested for treason. Disgusted by Hans' claims, the Duke's silenced until Anna's horse returns alone. Hans feels the princess is in danger, and asks volunteers to journey to Queen Elsa's palace with him to find her. The Duke volunteers his bodyguards, and secretly orders them to eliminate Elsa should they find her so they could put an end to the winter.

With Hans in charge, the bodyguards journey to Elsa's ice palace where they ignore Hans' orders to bring no harm to the queen and barge into the icy walls, immediately taking action. However, soon enough, Elsa gains the upper hands and uses her abilities to battle the duo, nearly killing them until Hans intervenes. Even so, the Snow Queen is captured and imprisoned, though the order given to the Duke's thugs either remained confidential or ignored, as the Duke was not seen given any punishment or word on the matter, though the thugs were not seen again for quite some time, likely suspended as punishment for disobeying Hans' commands.

Meanwhile, in the castle parlor, Hans decides he'll go back out in an attempt to find Anna, but one of the dignitaries suggests he stays behind, as he's all Arendelle has should Anna fail to return. Just then, however, she does, and desperately asks Hans to kiss her, prompting the Duke and the others to leave the room, giving them some privacy, completely unaware that the prince is actually villainous and power-hungry, planning to betray Anna to steal the throne. Moments later, Hans returns looking distraught just as the Duke declares action be taken once again. He tells them Anna was killed by Elsa, and that they said their marriage vows just before she died in his arms, thus making him king of Arendelle. The claims were lies, but the Duke and other dignitaries are oblivious to the fact, and Hans sentences Queen Elsa to death.

Moments later, Elsa accidentally causes a powerful blizzard to break through as she escapes from her prison cell, and the Duke of Weselton joins the other dignitaries, who rush onto the castle balcony to see what the ruckus was. From there, they are able to witness Anna sacrificing herself to save Elsa from the treacherous Hans and mourn for her death once she freezes solid doing so. Fortunately, she thaws soon enough, as well as the entire kingdom after love is revealed to be the breaker of Elsa's curse.

The Duke and the dignitaries all rejoice once peace is restored. The Duke, however, is denied speaking with Elsa about businesses, due to his earlier attempt to have her killed. The Duke tries to claim that he was innocent and a victim of fear, but to no avail, as he and his thugs are sent back to Weselton after being told that they are now cut off from trading with Arendelle by orders of Queen Elsa. While being pulled aboard his ship, he is heard insisting that his home is not named "Weaseltown" after being mispronounced once again, though purposely by Kai to annoy him. It's unknown what happened to the Duke and his thugs after returning to Weselton, but it's possible that they may have been punished by the King of Weselton for their actions on Arendelle or even stripped from their positions.

The Duke makes a cameo appearance in the sequel. While traversing the caverns of a mystic river called the Ahtohallan, Elsa encounters snowy manifestations of various figures from her past, including Hans and the Duke. One vision recreates the Duke's first meeting with Anna and Elsa, in which his toupee falls off. Another vision depicts the Duke dancing "like a chicken with the face of a monkey", much to Elsa's amusement. Elsa eventually soon learns that she got her powers from the mystical spirits following a curse inflicted on the Enchanted Forest (due to her mother Iduna saving her father Agnarr during a war between the Northuldrans and Arendellians instigated by Elsa's deceased grandfather King Runeard). With this information, Elsa was able to get Anna and their friends to lift the curse and bring true peace to both Arendelle and Northuldra.

Main article: Duke of Weselton (Once Upon a Time) 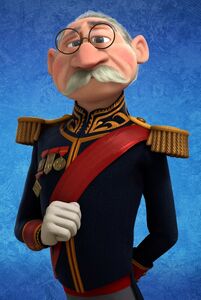 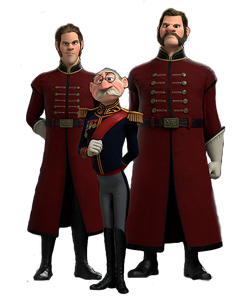 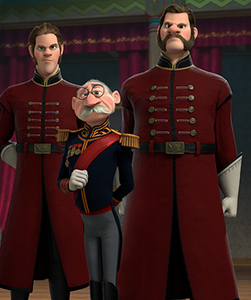 The Duke of Weselton in his glory.

The Duke and his Bodyguards, upon discovering Elsa's powers at the coronation.

The Duke of Weselton arguing with Hans.