The Dullahan (in Japanese: デュラハン Durahan) is a headless undead monster riding a horse that attacks with two Vampires and a recurring enemy from Final Fantasy Mystic Quest.

It appears at the top of Mt. Gale where it is responsible for the wind blowing across Windia damaging the Rainbow Bridge machine. In battle with Benjamin and Kaeli, it demonstrates its ability to use Instant Death attacks.

After it is defeated, the wind will stop, allowing the Rainbow Road to be formed between Windia and Pazuzu's Tower.

The Armodullahan, the alternate form of Dullahan. 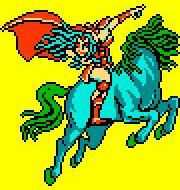 The Dullahan in Final Fantasy III. 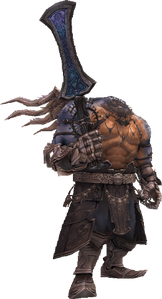 The Dullahan in Final Fantasy XII.
Add a photo to this gallery
Retrieved from "https://villains.fandom.com/wiki/Dullahan_(Final_Fantasy)?oldid=3524857"
Community content is available under CC-BY-SA unless otherwise noted.