Villains Wiki
Register
Don't have an account?
Sign In
Advertisement
in: Demon, Deities, Evil from the Past,
and 20 more

Inflicting Ismael (his vessel) with delusions and insane hallucinations.

Have Ismael collect Relic of Nilhe in order to be resurrected.

Use Ismael as a host/vessel to complete his resurrection (succeeded).
Kill junior Ghostbusters as a celebratory tribute to his return to life.
Cross into the human world.

Dumazu the Destroyer is an ancient demon of death and destruction who started his religious order of ancient pre-American sorcerers known as the Cult of Dumazu, and he is the main antagonist in the videogame Ghostbusters: Sanctum of Slime. Dumazu was buried 4,000 years ago but his cult survived into the present era. He sought to resurrect himself using the gathered Shards of the Relic of Nilhe.

A creature near mythic destructive capabilities, Dumazu is fearfully "praised" in the Americas by the now long dead Cult of Dumazu. Likewise, Dumazu despised love and affection. However, Dumazu was more of a mortal demon than a all-powerful deity he was believed to be and in 2010 B.C., was buried while his legacy faded into obscurity. If the Relic of Nilhe, once in his cult's possession long ago, were reassembled, Dumazu could be reborn and.

His tomb lay deep below the surface of present day New York City for centuries to come.

In 1954, Parkview Psychiatric Hospital was built over the ancient tomb unbeknownst to the public.

Decades later, Dumazu spoke only to Ismael the Deceiver, a man who was the last descendant of his Cult. The Shards of the Relic of Nilhe were unwittingly gathered by the junior team of the Ghostbusters. At Parkview, Ismael took the Relic and casted a spell via chantiy.

Dumazu possessed Ismael and drew the team into the another dimension. The team manages to destroy the vile creature and they return back to the mortal world. 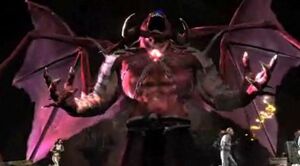 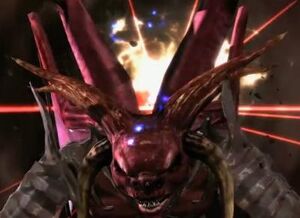 A close-up look at the face of Dumazu the Destroyer. 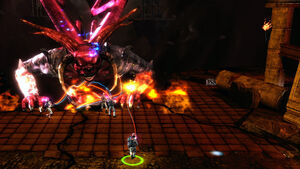