Assist Dekkom in his purposes for a large sum of money and kill anyone who discovers the plan. (failed)

Duncan Taylor is the central antagonist of the 2017 sci-fi film Geostorm.

He was portrayed by Robert Sheehan.

At first, Duncan appears to be a smart, however silly young man, in order to make no one imagine that he is a Machiavellian person and that he helps a corrupt and genocidal scheme, a perfect facade.

When his mask falls and Jake confronts him about the virus put in the system, Duncan reveals his true nature: he is an ambitious, sadistic, corrupt, arrogant, selfish person who clearly gives more importance to money than human life. When Jake mocks him that his pursuit for wealth will be meaningless if Earth become too devastated for him to spend any penny, he shows his sadism by stating that his effort is worth it as he wonders if he could witness the destruction of the world.

Duncan Taylor is a young British astronaut, who for the sake of avarice, joins Leonard Dekkom's genocidal purposes putting a virus in the system that aimed to combat the irregularities of the Dutch Boy.

At first, he turns out to be just another astronaut working on the Dutch Boy system. He, however, arouses suspicion in Jake right at the beginning.

An Indian scientist, Habib Makmoud, discovers Dekkom's corrupt schemes, and is killed by him when he closes him in a corridor before opening the inner tube, which causes him to be pushed into space and die.

When astronauts are about to prevent Dutch Boy from continuing to wreak havoc on Earth, putting a pause on Dekkom's genocidal purposes, a virus enters the system and programs the ship to explode.

Jake claims that only one person could have put this virus in the system, and that person is Duncan. Jake confronts him, hitting and pressing him against the table. And he says that, unlike Jake, he won't be on the ship when it explodes while pulling a gun.

Duncan soon confesses that for a much larger amount of money than the scientists like him receive, he decided to assist Dekkom in his purposes. Revealing himself to be a complete sociopath, he shows total disregard for human life, as well as for the number of lives that would be decimated by the catastrophes generated by the Dutch Boy. Duncan happily asks Jake whether he would be curious to see the world burn after Jake mocking him for pursuing big paycheck for nothing, showing a lot of sadism.

Duncan continues to fight Jake with the gun in his hand, causing him to shoot at the lunar module window and it breaks before killing Jake too, and Duncan dies in the same way that he killed the Indian scientist early in the film, when he had even discovered Dekkom's corrupt schemes. 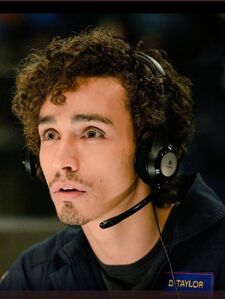 A close-up view of Duncan Taylor. 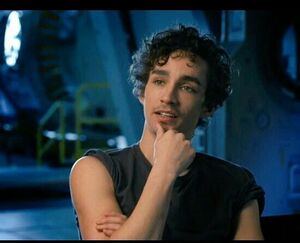