Betray the Assassin Order and join the Templars.

Duncan Walpole is the opening antagonist in Assassin's Creed IV: Black Flag. He was a member of the Assassin Order, who planned to go rogue and join the Templars, and meet with Governor Laureano de Torres y Ayala. While sailing there, he attacked a pirate brig, but it was destroyed and he was forced on land. He attempted to bargain with the remaining pirate, Edward Kenway, but was killed by the latter, who also took his identity to collect the money from the governor. He is the main antagonist of Sequence 1, and is mentioned throughout it.

Duncan Walpole was born of a wealthy family, since he was the cousin of the Prime Minister of Britain, Robert Walpole. He joined the Navy when he was 18 and slowly rose up the ranks, but ended up giving up due to his impatience and arrogance. He then left the Navy and went to the East India Company, where he met a man who introduced him to the Order of Assassins.

Although Duncan's reputation and skills were growing fast, he still sought fortune and glory, which he wasn't able to get in the shady Assassins Order. His loyalty shattered, and the rival Templar Order successfully turned Duncan to their cause. Grand Master Laureano de Torres y Ayala invited Duncan to Havana, where they could conspire against the Assassin Order, but on his way to Havana he engaged in a Ship Battle with a Pirate ship called the Jacobite. During the battle with the Jacobite, Duncan's ally ships were all wrecked by the Jacobite who was under the command of Captain Bramah and Edward Kenway, and after his own ship was heavily damaged, Duncan went to the Jacobite by himself.

Walpole managed to stab Captain Bramah to death with his Hidden Blade, but just when he was about to stab Kenway, the Gunpowder barrels exploded and both Edward and Duncan were sent flying to the water. Edward managed to survive the explosion and reached the beach safely, but so did Duncan, who offered money to Edward in exchange for his help in reaching Havana. But Edward realized that Walpole was out of money, and approached Duncan, who pointed a gun at him. The gunpowder was however ruined by the water, and Duncan was forced to run for his life. After an insane pursuit, Walpole engaged in a sword fight with Edward, but Edward managed to dodge Duncan's slash, and proceeded to stab Duncan to death.

Kenway then read Duncan's invitation to Havana and then switched his clothes with Duncan, with former wanting to impersonate Duncan so he could gain Torres's gold and glory. This caused the game's later events, as the Governor and the Templars soon realized that Kenway was not Duncan. The governor then had Kenway sent to a slave ship, angered that the pirate stole the Templars of Duncan. When the Assassins learned of Duncan's death, they didn't mourn him since he betrayed them, and Ah Tabai was glad that Walpole was dead. 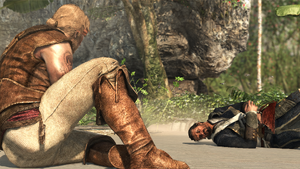 A wounded Walpole, being haggled by Edward Kenway. 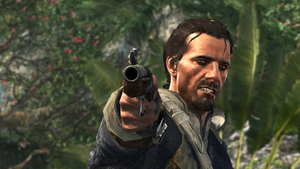 Duncan holding Kenway at bay with his flintlock. 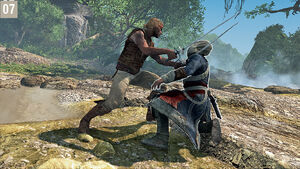 Walpole's death.
Add a photo to this gallery

Retrieved from "https://villains.fandom.com/wiki/Duncan_Walpole?oldid=4270896"
Community content is available under CC-BY-SA unless otherwise noted.