Dune is the true leader of the Desert Apostles in Heartcatch Pretty Cure!, having fought against several generations of Pretty Cure before facing Cure Flower 50 years prior to the season's start. He is first shown as a shadow on a video screen, talking to Sabaku about the new fairy that has been born. He is shown in flashbacks and in several later episodes, but his true form and appearance are revealed in Episode 45.

In the past, Dune has fought against many generations of Pretty Cure, though it is not said whether he defeated them or not. What is told by Kaoruko, however, is that they fought several times before Cure Flower used the Heartcatch Mirage, sacrificing her position as Pretty Cure to end the battle in a draw. However, Dune saw it as a defeat and fell into a deep sleep to restore his power. In his absence, he allowed Sabaku and his minions to battle the later generation of Pretty Cure, Cure Moonlight.

During his return at the awakening of the third fairy, he gives new orders to Sabaku from his private asteroid, heading to Earth to eradicate the Cures. Later noticing that Pretty Cure is getting stronger day by day, he gives Sabaku three Dark Bracelets to power up the three minions.

Dune arrived at Earth and sent a Desert Seed down to Earth which quickly turned into a Desert Devil. The Desert Devil was defeated by the Pretty Cures with the aid of the newly acquired powers, the Super Silhouette. At Christmas, Dune returns to Earth and is after the power Cure Flower sealed of his from their battle. The Cures attack Dune seemingly getting the upper hand. As the dust settles Dune is still standing and then goes on the offensive against the Cures. Taking out Moonlight first quickly followed by Sunshine and Marine he then turns his attention of Cure Flower. Cure Blossom tries to stop him but is unsuccessful and also falls to his power. Dune and Cure Flower then fight but she also is no match for him in her weakened state and defeats her. Leaving for his fortress with Kaoruko the Cures are left defeated and unconscious. He then proceeds to regain the power Cure Flower sealed away in her necklace by breaking the necklace. The great heart tree then arrives and Dune shatters the barrier protecting it and forces Kaoruko to witness him make the great heart tree wilt fully. However this did not break the spirits of the those who had been purified by the Pretty Cures allowing hope to still exist and furthermore allow the Cures and their fairies to retain their powers regardless of what he had done to the tree.

Dune arrives shortly after Dark Cure's defeat and begins to battle Sabaku, Moonlight joins the fight protecting her father from a barrage of energy shots from Dune. Blossom joins the fight only for Dune to create a dark energy bomb which explodes breaking the Pretty Cure transformation and leaving all 3 on the ground.

As Dune prepares to do the same Yuri's father runs to the dark energy and uses himself to shield his daughter and Tsubomi from the explosion. He tells Yuri to look after her mother and as she runs to her father the energy explodes leaving only taters of her father clothes. Enraged by Dune's actions, Yuri prepares to engage him in battle only for Tsubomi to grab her arm begging her not to fight with anger and hatred. Yuri tells Tsubomi that she despises Dune since he is the reason why she has lost both Cologne and her father.

Tsubomi again reminds Yuri that the Yuri she looks up to would never fight out of anger and would not be willing to do what she is about to and gives Yuri the remains of her Heart Seed that Dark Cure possessed, helping Yuri remember that Pretty Cures fight with love. The two transform into Blossom and Moonlight and begin to battle Dune. Just managing to keep the battle equal between them until Dune shoots dark energy at them which exploded on impact. As the dust settles Marine and Sunshine are revealed to have saved them from the attack and they join Moonlight and Blossom in fighting Dune. All the four Cures use their Forte Wave attacks against Dune followed by Marine and Sunshine combining to use Floral Power Fortissimo and Blossom and Moonlight to combine to use the same. All four hit Dune at the same time and then call forth the HeartCatch Mirage and use HeartCatch Orchestra against him.

However, even the HeartCatch Orchestra wasn't enough to stop Dune and he broke free, telling the girls that their love would never overcome his hatred. Growing to a humongous size through his power, he begins assaulting the Earth. The Cures face him one last time, Blossom telling him that their love may not be strong separately, together they can overcome him and everything else. Using the power of the HeartCatch Mirage, the four HeartCatch Cures merge into Infinity Silhouette and with the Pretty Cure Fist Punch, defeat and purify Dune. As he disappears, the Earth is restored to normal. 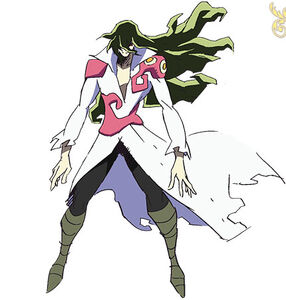 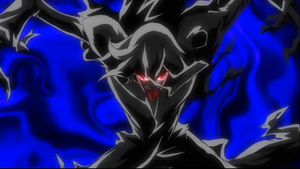 Dune's silhouette in Pretty Cure All Stars DX 3.
Add a photo to this gallery

Retrieved from "https://villains.fandom.com/wiki/Dune?oldid=3371759"
Community content is available under CC-BY-SA unless otherwise noted.