Member of the Subspace Army

Duon is a two-sided robot on one set of wheels, with one half being pink and possessing a head cannon and two arm cannons, and the other half is blue with a curved blade on his head tipped in light blue. Both sides have shoulder exhaust pipes in which rockets (pink side) or mines (blue side) can be fired from (as well as their arm cannons). A character who gets behind Duon can trick it into blowing itself up with its own rockets. It rotates one-hundred and eighty degrees to change his attack strategy. The wheels it pivots on is the yin and yang symbols from Chinese belief, symbolizing balance and juxtaposition of two forces.

After Solid Snake, Lucario, and Meta Knight kick all the Mr. Game & Watches out of the Halberd's control room, they fall to the bridge and dissolve into Shadow Bugs, which form into Duon. He is fought by Snake, Lucario, Fox, Zelda, Sheik, Peach, and Falco. It is basically a complete stage, Halberd Bridge. After it is defeated by the heroes, it dissolves into Shadow Bugs, leaving behind a trophy of Mr. Game & Watch. It is reformed by Tabuu to face the heroes in the Great Maze, but is defeated again by the heroes, along with the other Nintendo villains such as Bowser, Wario, Ganondorf, and King Dedede (who have joined the heroes in stopping and defeating Tabuu).

Duon appears as an advanced-level primary attack-type spirit. Its spirit battle is a Stamina battle against giant Ice Climbers, in which shooting items picked up by the enemy have increase power. It gives no special effect when used. 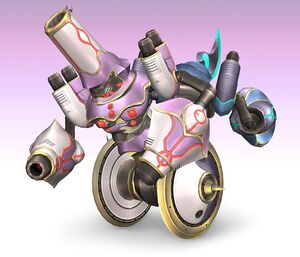