The Duplicating Dog is an unnamed one-time villain from the 2016 reiteration of the Cartoon Network original series The Powerpuff Girls, only appearing in the episode "Splitsville". It is a big, monstrous dog-like creature, that can clone itself.

Its vocal sound effects were provided by Dee Bradley Baker.

The Duplicating Dog ran amok in Townsville, destroying everything. Buttercup tried to stop the creature, alone, using nothing but her fists, in an act of diving head first into battle. She threw a trash can at the back of its head, angering it and getting its attention. The two of them took off, after each other and Buttercup gave the dog a good punch in the face. The dog split into two versions of itself and both of them attacked Buttercup. Buttercup fought back against both of the dogs, and both of the dogs split into two versions of themselves as well. Before she knew it, there were tons of duplicating dogs, all surrounding her.

The gang of duplicating dogs all cornered her in an alley way, ready to completely annihilate her, and Buttercup yelled at them to "Stop!", which strangely worked for some reason. Buttercup realized that she could control the dogs, by treating them like every day house pets. Phrases like "Sit", "Beg", and "Speak" would control the dogs and put their actions within her power.

The next thing she knew, Buttercup was leading a conga line of duplicating dogs, realizing that her method of handling the dogs would be something Bubbles would have done. Buttercup told the dogs to play dead and the dogs exploded into a bunch of rainbow goo, having apparently actually died. 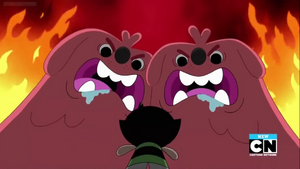 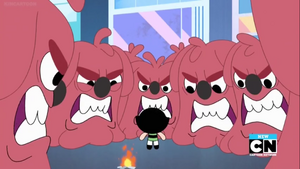