They were all voiced by Graham Miller in both films, who later played a young Finn in the sequel.

As indicated by how they are, they are aliens made out of Lego Duplo pieces. This species are highly enigmatic, but it is likely that they care about no one but themselves, as they came to the LEGO world to destroy Bricksburg. It is possible that they have done this with other cities, as Emmet was shocked as to what they were planning.

When the Man Upstairs (Finn's father), says that he is letting Finn's sister play with the LEGOs as well, to be more specific LEGO Duplos, Finn gets confused about the announcement. The Duplo Aliens are then beamed down from a bright colored spaceship into Bricksburg, with the leader announcing their intentions to invade and destroy the LEGOs, which gets Emmet to say, "Oh man." In the second movie, their goals are accomplished, as they destroyed Bricksburg. However, it is later revealed that they did not want to destroy the Lego universe, but simply wanted to come in peace. 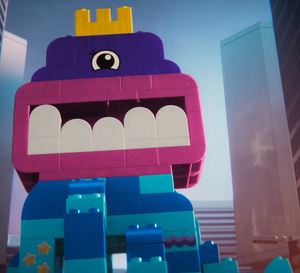