Fast for his bulky size
Freezing

Duriel is one of the "Lesser Evils" of Diablo lore and an Antagonist in Diablo II, where he becomes an Act Boss - he is known as the Lord of Pain and rules over a section of Hell where Demons are subjected to the most horrific forms of physical torture imaginable, so great is Duriel's thirst for pain that he is known to self-harm when there are no available Souls to torture.

Duriel is a large Demon with the lower body of a maggot and a humanoid upper body, but with two large blades in place of his hands. A giant horn protrudes from his forehead, and his mouth is filled with sharp teeth and framed by what appears to be two mandibles.

From the Arreat Summit: As the Sin War plodded along through the centuries, many in Hell began to wonder just what it was they were fighting over. The Lesser Evils of Hell were growing tired of the endless ebb and flow in the tides of mortal favor, as well as those in the elaborate schemes of the three Prime Evils - Diablo, Baal and Mephisto. The Lesser Evils longed to return to the epic days of the Great Conflict, and lay siege again to the gates of the High Heavens.

Two of the Lesser Evils, Azmodan and Belial, saw the situation as their chance to overthrow the Prime Evils and take control of Hell for themselves. The two Demon Lords made a pact with Andariel and Duriel - as well as their minor brethren - assuring them that Humanity would not deter the ultimate victory of Hell. Azmodan and Belial devised a plan to end the stalemate and achieve victory in the Sin War, ultimately riding the bloody crest of the Great Conflict straight into Armageddon.

Thus, a great revolution was set into motion as all of Hell went to war against the Three Brothers, seeking to send them into a Dark Exile.

Over the next two centuries, the three imprisoned brothers focused their Demonic powers upon corrupting the Soulstones that bound them to the mortal plane and began bending the will of any nearby Humans. Mephisto was the first imprisoned and, consequently, was the first to break free from his bondage. His wrath against those who had put him in such a compromised position was swift and merciless.

As punishment for his part in the Dark Exile that sent the Prime Evils to the mortal Realm, Duriel has been left behind by Baal to guard the Tomb of Tal Rasha. Embittered by this new position of solitary servitude, the Lord of Pain has claimed the souls and blood of many bold adventurers.

After he was defeated by the player character in Diablo 2 Duriel's Soul ended up in the Black Soulstone. He, along with the other 3 Lesser Evils, as well as Mephisto and Baal were merged into Diablo turning him into a singular Prime Evil. 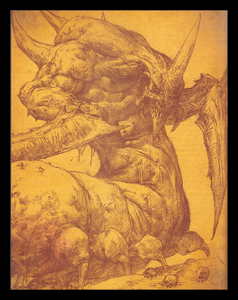 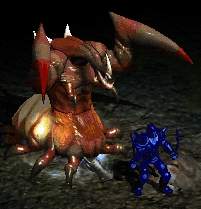 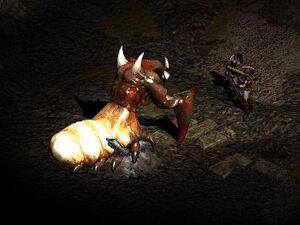 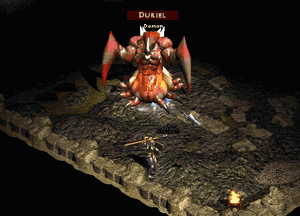 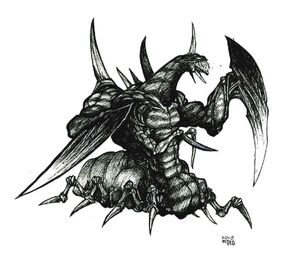 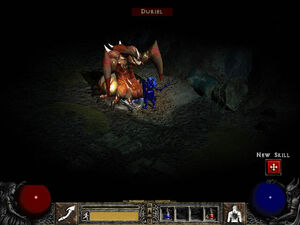 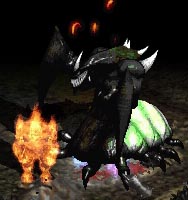 Retrieved from "https://villains.fandom.com/wiki/Duriel?oldid=3410822"
Community content is available under CC-BY-SA unless otherwise noted.