The Nameless Terror
The Balrog

One of the Balrogs

Lord of Moria
Soldier and officer of Morgoth's army (formerly)

Instilling absolute terror into the Goblins who share a home with it.

Destroy or drive out the Dwarves of Moria (succeeded).

Destroy the Fellowship of the Ring (failed).
Kill Gandalf. (succeeded, although the latter killed him).
Help Morgoth to conquer, corrupt, and destroy Middle-earth (formerly).

Durin's Bane, also known as the Nameless Terror, is a supporting antagonist in J.R.R. Tolkien's novel, The Lord of the Rings, as well as the 1978 and 2000s film adaptations.

It was a Balrog of Morgoth who fought during the First Age. However, he survived, and went into hiding in Moria. He later encountered the Fellowship of the Ring and was eventually slain by Gandalf.

This particular Balrog, whose name was unknown, is a Balrog that fought with Morgoth's armies during the First Age under the command of Gothmog. However, Morgoth's armies were defeated, and most of the Balrogs were killed off. Durin's Bane went into hiding in the deep places of the world with few other Balrogs that had survived the First Age (for this Balrog, Moria).

Eventually, while hiding in Moria, it was accidentally awakened by the Dwarves in Moria, who delved too deeply into the mines in their insatiable appetite for more precious Mythrill. Upon awakening, the Balrog killed or drove out the Dwarves with all speed.

In TA 3019, the Fellowship of the Ring are forced to enter Moria. The Balrog discovers them, scares off the Goblins surrounding the Fellowship, and follows them to the bridge of Khazad-dum. The Fellowship of the Ring make it across the bridge, but Gandalf stays behind, and prevents the beast from crossing, shattering the Balrog's sword. He uses his magic staff to break the bridge, but as Durin's Bane falls into the chasm below, it wraps its fiery whip around Gandalf's legs, and drags him down with it. 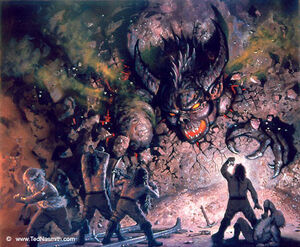 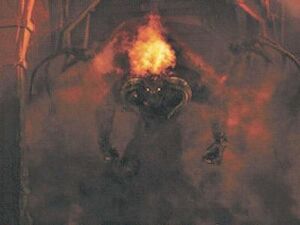 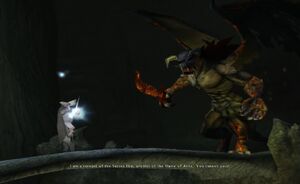 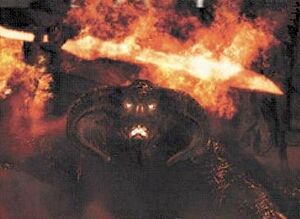 Durin's Bane holding his fiery sword and about to attack Gandalf.

An illustration of Durin's Bane in Saruman's book. 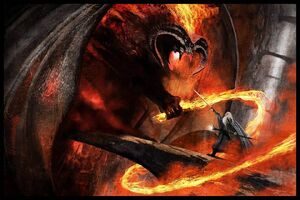 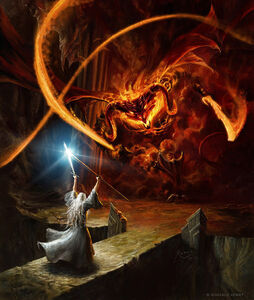 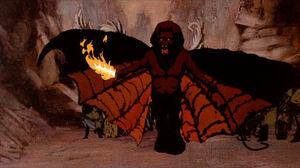 Retrieved from "https://villains.fandom.com/wiki/Durin%27s_Bane?oldid=3685384"
Community content is available under CC-BY-SA unless otherwise noted.