Twin sword blades
Great physical strength
Can Slide-evolve into Velgemon
As Velgemon, can create a giant ball of darkness that can destroy an entire area

He was voiced by Crispin Freeman, who also voiced Electro.

Duskmon is a Human Hybrid Digimon that resembles a demonic black knight whose armor consists of skulls for his head, hands, and feet, and has golden hair. He has eyes on his shoulders, chest, and his feet. His real red eyes can be seen in the mouth of his skull helmet. He also wields two red retractable blades as swords.

After the 10 legendary warriors defeated Lucemon years ago, Cherubimon (now corrupted by Lucemon) took the spirits of Earth, Water, Wood, Steel, and Darkness and created his own minions. He corrupted the Spirit of Darkness. Cherubimon sees Koichi all alone, and gives him the corrupted Spirit of Darkness, and soon, Duskmon was born. Koichi became Duskmon, and under Cherubimon’s orders, he seeked to take revenge on his brother, Koji, for abandoning him.

Duskmon appears later, talking to Mercurymon about dealing with the Digidestined himself. After the battle against Petaldramon and reverted back to Arbormon, Duskmon arrives. Arbormon tries to ask Duskmon for help, but Duskmon, thinking that Arbormon is now useless, cold heartedly kills him and scanned his data. The Digidestined battled Duskmon, but Duskmon on the upper hand was too strong, and the Digidestined had no choice but to flee. While finding a safe place, Koji scolds Takuya for stupidly attacking Duskmon by himself without thinking. Koji later confronts Takuya, questioning him about why he came in the first place. After a heated argument between the boys, Duskmon reappears again, and the Digidestined confronted him again, but were still no match for Duskmon. Just when he was about to kill Agunimon, KendoGarurumon jumped in the way and took the attack, reverting him back to Koji. When Takuya screamed out Koji's name, it caused Duskmon great pain and released a blackout.

While Takuya, feeling guilty of letting his friends down, returns to the Real World with DarkTrailmon, only to end up being transformed into Flamemon. Takuya (now as Flamemon) sees an illusion of Duskmon heading towards him, causing Takuya to cower and run away. While searching for his house, the hallucination of Duskmon kept pursuing Takuya. Takuya, now realizing his mistake of leaving his friends behind, decides to return to the Digital World with the DarkTrailmon, but the Duskmon hallucination guards his path. Takuya, now fed up, regains his courage, and drives the hallucination away.

Later on, while Takuya and Koji were still inside Sakakkumon's world, Duskmon sees Koji again, but despite being Lobomon and KendoGarurumon to fight him, Duskmon easily defeats Koji. Just as Duskmon was about to kill Koji, Koji then became Beowulfmon, due to the power of Seraphimon's data. During the fight, Beowulfmon and Duskmon were released out of Sakakkumon's world, and Duskmon ran off with Beowulfmon following him in pursuit.

While Takuya, Zoe, Tommy, J.P., and Bokomon and Neemon were looking for Koji, Koji follows Duskmon. Cherubimon eventually gives Duskmon the corrupted Beast Spirit of Darkness, and becomes Velgemon. Velgemon tries to destroy Beowulfmon with his Dark Vortex attack, but Beowulfmon barely manages to escape from the attack, only to revert back int an badly injured Koji. Velgemon was about to attack him again, when suddenly Koji’s Digivice stopped Velgemon, seizing him. Velgemon then realizes his flashbacks back to when he was Koichi. Velgemon then flies away in agony, confused about that if he was Koji’s brother or not.

Later on, he slide evolves back to Duskmon, and fights Beowulfmon. With the help of Aldamon, Beowulfmon defeated finally defeats Duskmon and Velgemon, freeing Koichi from the corrupted spirits of Darkness.

Duskmon was a minion of the Twilight Army, and possibly the right-hand of DarkKnightmon. He was absorbed by DarkKnightmon, and became, DarkKnightmon Darkness Mode (Duskmon). 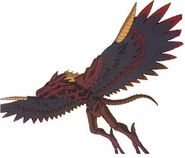