Commander of the Sableye

Eliminate those who want to prevent the planet's paralysis.

Dusknoir (in Japanese: ヨノワール, Yonoir) is a Ghost-type Pokémon who is the secondary antagonist in Pokémon Mystery Dungeon: Explorers of Time, Explorers of Darkness, and Explorers of Sky.

He served as a minion to Primal Dialga, who had orders to eliminate those who wanted to prevent the planet's paralysis. He had gone to the past to find and eliminate two heroes who had gone to the past to change history which were a Grovyle and a human who was now a Pokémon (the player). Although he is the secondary antagonist (including the Post-Game) of the main game he becomes the deuteragonist of Grovyle's Special Episode when he redeems himself in Grovyle's special episode/mission.

While he was in the past, he posed as a caring, friendly, and vastly intelligent Pokémon who had an extensive amount of knowledge. Furthermore, he retained a kind and modest attitude in regards to his fame, while also willing to save the player and their partner from a group of hostile Pokemon.

The player and townsfolk come to realize that he is, in fact, a sinister and evil Pokémon who is working for Primal Dialga to make the future into a dark, twisted frozen landscape known as the Planet Paralysis.

Afterwards however, whilst in the future with Grovyle, Dusknoir comes to see the error of his ways and chooses to help Grovyle in preventing the Planet Paralysis, eventually leading to his redemption.

Dusknoir looks like a typical Dusknoir Pokémon. He has a very light grey cylinder-shaped head with a knob-like shape on top.

He sports one black eye with a large red pupil and thin yellow iris surrounding it.

His arms are a light grey with yellow rings near the elbow and cuffs on his wrist that make it look like he's wearing some sort of long shirt. His grey hands are big and human-like.

He has a large spherical body that ends in a whisp much like a stereotypical ghost, and has two yellow triangles with thin black rings circling around them. His belly has a jagged line running across it that can open up like a mouth. SImliarly, he has yellow eyes and a mouth on his back. 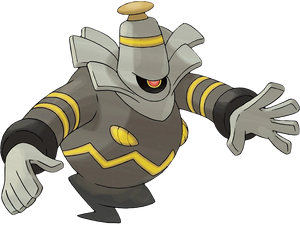 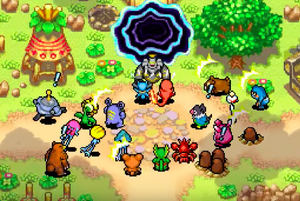 Dusknoir grabbing the protagonist and their partner pokemon to drag them into the portal to the grim future. 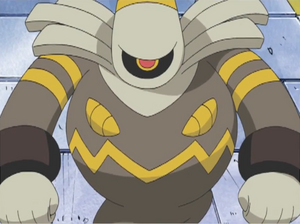 Dusknoir in the "Beyond Time & Darkness" anime special. 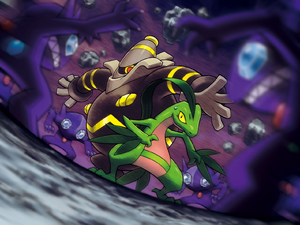 Dusknoir teaming up with Grovyle.