Assisting and sucking up to his master (formerly).

Assist Dick Dastardly in retrieving the skulls of Cerberus and opening the gates of the Underworld (succeeded; eventually abandoned)

Dusty is a supporting antagonist-turned-supporting protagonist in the Warner Bros. 2020 animated film Scoob!, the first installment of the Hanna-Barbera Cinematic Universe. He is one of Dick Dastardly's minions the Rotten Robots until he turned against his master.

Like the other Rottens in the film, he was voiced by Vanara Taing.

Dusty looks much like the other Rotten robots, except he has gold as a defined color (for his head fin, shoulder covers and, notably, round eyes). In addition, his head was replaced with a handheld vacuum cleaner after Dastardly ripped it out and chucked it into a furnace.

Following the Rotten robots' failure to capture Scooby Doo and Shaggy, Dick Dastardly became upset at them (Dusty included) because of their incompetence and contrasted them to his absent sidekick Muttley, who is alluded to be more competent than the Rottens. Dusty apologizes for his and the others' failure, but that apology alone only infuriated Dick more, to which Dick calls him a "suck-up" before removing his head and replacing it with the top of a vacuum cleaner.

Dusty was not seen again until he passed by Velma, Daphne, and Fred's cell after Dastardly captured them; Daphne persuades him to let them out of the cage after cleaning out the dust in his head, in which he leads them to a room with a communications device.

Dusty later assisted in trying to take down the Mystery Machine (which was equipped with wings) following Dastardly's arrival at Athens to open the Underworld gates, but Dusty misfires intentionally so that Daphne's life is saved because of her kindness to the robot. Dusty then leads the Rottens to help the Mystery Inc gang and the Falcon Fury crew defeat Cerberus instead of assisting Dick Dastardly and an escaping Muttley; he and the other robots captured the duo and had them tied up to be imprisoned. At the end of the film, Dusty is revealed to have been employed by Mystery Inc, and had either revealed his name, or been given the name.

In the end credits, Dusty is seen watching what is presumably a video about Blue Falcon on a small computer with headphones. 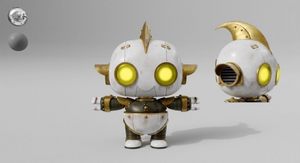 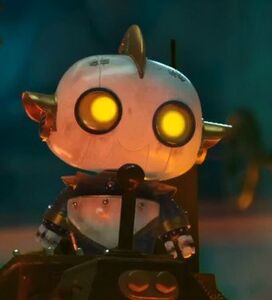 Dusty seen beside Dastardly along with another Rotten.

...before he gets a powerful elbow strike from his master.

(Dick Dastardly: You aluminum imbecile!) Dusty cowering as Dastardly throws the picture frame at the wall.

Dusty being held by Dick Dastardly.

Dusty commanding the other Rotten robots to help, with Alice carrying him.