Get enough money to escape the United States (formerly).
Rescue Jack Marston.
Destroy both the Gray's and the Braithwaite's.
Avenge Hosea and his fallen gang members.
Kill Angelo Bronte.
Escape Guarma.
Kill Molly O'Shea for "betraying" the gang.
Kill Leviticus Cornwall.
Stop Colm O'Driscoll from escaping his execution and avenge Annabelle (all succeeded).
Drive away the federal government and bureaucracy from the west (failed).
Kill Micah Bell for destroying his gang (succeeded).
Kill John Marston and Harold MacDougal (failed).
Recruit Native Americans as a way to grant them freedom (succeeded, until his death).

Dutch is mentioned many times in the first two chapters, the New Austin and Nuevo Paraiso chapters. He finally makes an appearance in the third chapter, the West Elizabeth chapter, where he serves as the main antagonist. In Red Dead Redemption II, however, Dutch acted as an ally during the first five chapters, before becoming the secondary antagonist in the sixth chapter and epilogue.

He was voiced by Benjamin Byron Davis.

Dutch van der Linde is an outlaw having a gang consisting with John Marston, Arthur Morgan, Micah Bell, Charles Smith, Javier Escuella, Bill Williamson, Abigail Roberts and several others. They terrorized the West until 1899 when a botched train robbery occurs, and several gang members leave Arthur and John to die. This leads to John and Abigail to retire, and the gang being disbanded due to Dutch's madness.

In 1899, Dutch and his gang hideout in Colter after a botched robbery in Blackwater. He plans on getting enough money to leave the United States.

After a robbery in Saint Denis goes horribly wrong, Dutch starts to become paranoid, this was noticed after setting up camp in Beaver Hollow. When Arthur confronted Micah and called him out as the rat, Dutch still turned against Arthur and John before leaving them to fight off the invading Pinkertons. When Arthur and Micah are fighting to the death, he stops the fight. Arthur and Micah plead to Dutch to turn on the other, but Dutch, not knowing who to believe anymore, simply walks away in silence.

Eight years later, Dutch teams up with Micah once more to retrieve the money from Blackwater, which they succeed in doing so. When John infiltrates Micah's hideout to kill him, Dutch appears, resulting in a Mexican standoff between the three. After being persuaded by John, Dutch shoots Micah in the chest, allowing John to finish him off. John tries to thank Dutch, but once again, Dutch simply walks away in silence.

Four years later, Dutch returns after the death of Bill, having recruited young Native Americans for his army. John is ordered by Edgar Ross to kill him in order to get his wife and son back. John witnessed Dutch murdering a police officer in his hideout and tries to kill John afterwards, but only knocks him out when the bullet hits John's binoculars. John and the BOI later confront Dutch and his gang when they tried to rob a bank, but Dutch and his gang escape by murdering Muriel Scranton, a worker at the bank.

Later, John and the BOI take on his army, with John confronting Dutch by himself after cornering him at the edge of a cliff. Dutch laments about how the world is changing despite his efforts to prevent the change, and warns John that the BOI will target him next before committing suicide by falling off the cliff. Ross shoots his dead body with John's gun, saying that it's better for the report.

Originally, Dutch used to have a much warmer and noble side to his personality; presenting himself as a witty, charismatic and sophisticated outlaw who highly conformed to his own philosophies about life in the Wild West. He did show to be protective of his own fellow gang members, having raised Arthur Morgan and John Marston like his own two sons. He also became outraged at Jack Marston having been kidnapped by the Braithwaite family and in retaliation, stormed their manor while killing them all and demanding where the child had been taken.

However, the Pinkertons' pursuit, the death of his companions (Especially Hosea), and the advancement of society made Dutch begin to become crazy and he became more and more ruthless, egotistical, narcissistic, and vindictive. He began to value blind loyalty more, criticizing Arthur and John for this and and even considering them disloyal. Instead, he preferred to listen to Micah because he never questioned him, a mistake that would cost him dearly. While at first, Dutch seemed to have limitations as to how far he'd go, he eventually took a deeper plunge into both paranoia and mental instability following his gang's downfall.

One thing about Dutch for certain, is that he's a skilled manipulator who uses his charm and wit to gain the favor of whomever he may wish to trick, able to present himself as a likable and humorous fellow at one moment while hiding his true motives. He also lectured over a greater meaning of the life of an outlaw, which he imposed on his gang as well, although Arthur eventually saw this meaning as nothing more than an excuse or ruse to commit atrocities in the favor of some good. Eventually losing his reason, and gaining a more reckless and manic attitude due to coming further unhinged as well as falling victim to Micah Bell's manipulation. Eight years later, Dutch finally accepted Micah's betrayal and ends up shooting him at the end, showing that deep down he feels remorse for not having listened to Arthur at the time.

It is a subject of debate by Arthur, John and Sadie whether Dutch had dropped from his previous, more moral attitude, to his more ruthless and callous behavior, or whether his kinder side was just a veil to the person he really was. Given the nature of his situation; his gang's impending and inevitable downfall, becoming more paranoid of treachery within his gang, being manipulated by Micah and his own descent into madness, either of these possibilities remain highly plausible.

By the original Red Dead Redemption, Dutch had fully degraded from an idealistic leader to a delusional and frantic killer who immediately taunted John Marston over his relationship with Abigail, and killed a woman in order to cover his escape. However, Dutch also did, near the end of his life, exhibit remorse for his actions, with him being secretly aware that nothing he has done has helped preserve his time or change anything. He also states that he was ultimately unable to change and stop what he was fighting for due to his own fundamental nature. At the end, Dutch calls himself a monster and commits suicide, claiming that him and John's time has passed. 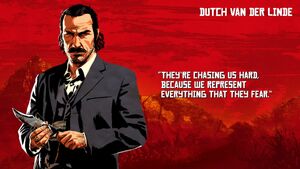 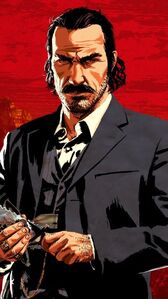 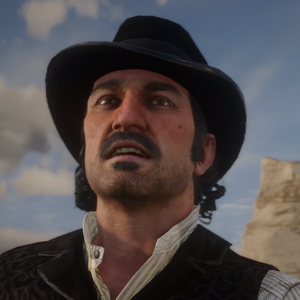 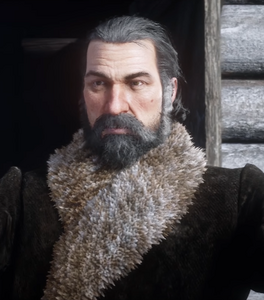 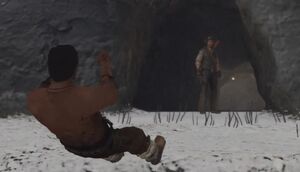 Dutch commits suicide by falling off the cliff. 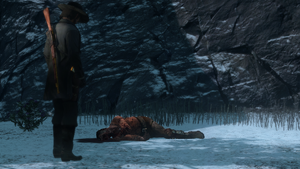