Villains Wiki
Register
Don't have an account?
Sign In
Advertisement
in: Affably Evil, Villains by Proxy, Fallen Heroes,
and 34 more

Transforming his master into a peacock-themed supervillain

He is voiced by Melissa Fahn, who also voiced Gaz Membrane.

Thousands of years prior to the series, Duusu and the other Kwamis traveled the universe, unable to interact with any creatures, particularly humans. This was until a mage forged the Miraculouses, so Duusu and the others could both interact with mankind and grant them the ability to transform into heroes; Duusu and the Peacock Miraculous able to grant the power of creating creatures known as Sentimonsters out of a person's emotions. During one of many trials in his training to become a Guardian of the Miraculous, a boy by the name of Wang Fu used Duusu and the Peacock Miraculous to create a Sentimonster so as to bring him something to eat, although, imbued with both Fu's hunger and resentment of his training, it gained an insatiable hunger for the Miraculouses and began to devour the different Miracle Boxes and everything else around it.

As a result of this, Fu lost his staff and thus his ability to control the Sentimonster, resulting in him having to flee from the destroyed Guardian's Temple with the last Miracle Box and eventually losing the Butterfly Miraculous, Peacock Miraculous and Miraculous Spellbook as a result, Duusu being lost along with them. Decades later, through unknown means, Gabriel Agreste acquired all three items.

In "Mayura", in order to help Hawk Moth after he is cornered by Ladybug, Cat Noir and their allies, Nathalie activates the Peacock Miraculous and uses Duusu to transform into Mayura off-screen. After creating a Sentimonster to save Hawk Moth, Nathalie presumably returns the Miraculous and Duusu to Gabriel's safe.

In "Reflekdoll", Duusu transforms Nathalie into Mayura to create the Sentimonster Reflekdoll. Hawk Moth and Mayura are ultimately defeated, and, after they both detransform, Duusu expresses excitement over what has just happened. However, his excitement quickly fades as she becomes concerned over Nathalie falling to the floor coughing. He asks her if she’s alright, to which Gabriel says that she will be fine and is just tired. He becomes excited again only for Gabriel to tell her to give Nathalie peace and quiet.

In "Ladybug", Duusu is seen with Nathalie when she is resting following another coughing fit, with Gabriel taking the Peacock Miraculous away and reminding her of how dangerous it is to use a broken Miraculous, not wanting her to help him at such a cost. Despite this, Nathalie steals the Miraculous back from him as he is sleeping and buys an Eiffel Tower keychain, activating her Miraculous in the sewers afterwards.

Duusu has a very sporadic personality. He can be happy one minute and then overly sad the next. He is very easily excited and seems to enjoy chaos, though he is very concerned by Nathalie's declining health caused by his damaged Miraculous. Interestingly enough, he does not seem to care about his Miraculous being used for evil, or he may just simply be unaware of his user's actions. 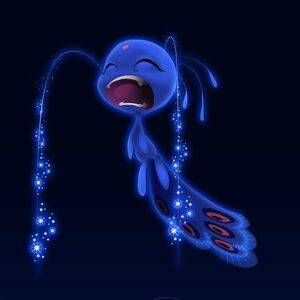 Duusu as she appears in her concept design. 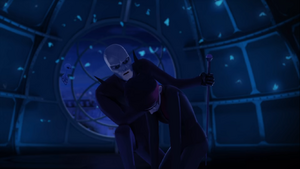 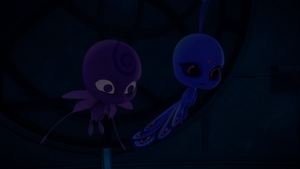 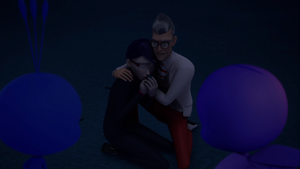 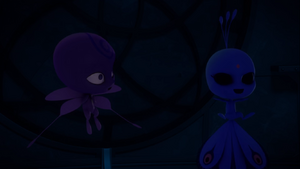 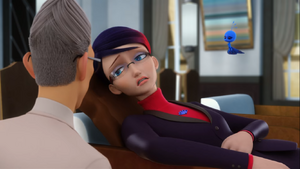 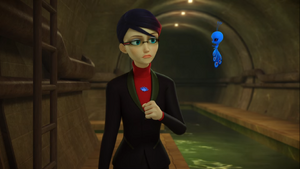 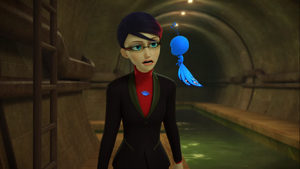 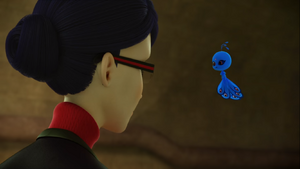 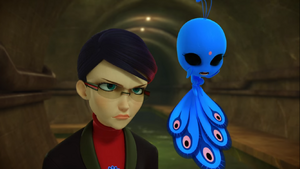 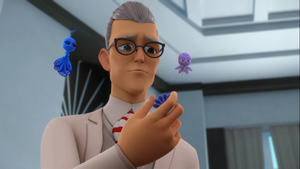