Hanging out with Niko Bellic.

Have Niko kill Jayvon and retrieve his money (succeeded).

Dwayne Forge is an supporting character from Grand Theft Auto IV. Although he is not directly evil, but in fact a very kind person with a troubled life, he is still a criminal and most likely did terrible things before he was sent to prison, and his missions involve killing several people, especially at the strip club.

He was voiced by Devin Richards.

Since his incarceration, the world he knew has changed completely. His empire has been usurped by his former protégé Playboy X, who now puts him off on one excuse or another, no longer having any interest in running with him. Forge's girlfriend, Cherise Glover, has also left him for a former police informant, and the Triangle Club that Dwayne used to run has been taken over by Latino gangsters. Forge, who already spent much of his prison time on suicide watch, sinks further into depression, contemplating suicide; nonetheless, he tells Niko Bellic, he "ain't there yet". Playboy X eventually pays Niko to appease Dwayne by working for him, but Niko genuinely connects with the man as both have been through a lot and have developed a distaste for others.

Despite his immense wealth however Dwayne states that he was miserable, feeling paranoid and angry - possibly due to the jealousy of others. Dwayne stated that he wanted to start a nice family and have children, but believed his drug dealing and prison stint had prevented it. Dwayne also invested in the adult entertainment business and bought The Triangle Club in Bohan, and a couple of pornography shops in Liberty City and Alderney City.

Dwayne was arrested and sent to prison. Dwayne ran the gang from prison at first, also providing his girlfriend Cherise "cars, houses, apartments, bank accounts, everything!" while inside. He states that during his time in prison he went through a lot of therapy and he was placed on suicide watch for much of his prison sentence, continuing to express some suicidal thoughts when released. Upon reflection Dwayne harbors mixed feelings about his former empire, he states that "it was sort of fun, and sort of like living in hell; seeing your old school mates turn into zombies, and knowing they was going to be your best customers". He says that he knew what he was doing was wrong but felt like he didn't have a choice due to his lack of money and education.

He talks to Niko Bellic where Playboy patronizes him. Playboy X pays to appease Dwayne by working for him, genuinely connects as they both experienced hardship and have developed a distaste for others. Niko finds him and Cherise, and chooses whether or not to kill Cherise before chasing and murdering Jayvon. Niko meets up with Dwayne at Cluckin' Bell, and gives him the money back. Niko helps him slowly put his life back together, by settling old grudges and reclaiming the Triangle Club. Dwayne tells Niko about his former gentleman's club, "The Triangle Club". Niko goes to the strip club and kills the Trunchez Brothers for Dwayne, allowing him to retake control. This angers Playboy X as the Trunchez brothers were business associates of his.

Dwayne also begins to talk trash about Playboy, and Dwayne's re-acquisition of the Triangle Club conflicts further with Playboy's business interests. Dwayne knew the effect that this would have on Playboy, doing it anyway out of passive-aggressive angst for turning his back on him. According to Playboy, he offered Dwayne half of his old gang back and he did not accept, likely insulted as he started the gang and taught Playboy the business when he was a mere child. Niko is subsequently hired by both men to assassinate one another, in the mission The Holland Play. Niko must choose whether to kill Dwayne or Playboy X.

If Niko chooses to kill Dwayne, Niko will respectfully tell Dwayne that it is "nothing personal". Forge accepts his fate in sorrow, turning his back to Niko and calling him "fake, just like the rest of them!" Niko then shoots Dwayne in the back of the head while turned away, killing him with visible regret. Playboy pays Niko, but, in apparent denial, calls him "cold" for assassinating his old mentor, and the two never speak again.

If Niko chooses to kill Playboy, Niko will arrive at Playboy X's Penthouse to kill him. When Niko is telling Playboy that he didn't change the game, he executes Playboy by shooting him in the neck, saying that the game changed him. Dwayne takes over the empire once again and gives Playboy's Penthouse to Niko, revealing he had the deed to it all along and, when told that he should take it by Niko, mentions that living in it would remind him too much of Playboy, who he states he "should have kept a closer eye on". He will also become a friend, and, if his friendship's "like" percentage is raised high enough, he will send two gangsters as bodyguards whenever Niko needs backup. If Niko and Dwayne get drunk during a friendship activity, Dwayne may confess that he killed Playboy because he was too jealous of his success.

During their friendship activities, Dwayne tells Niko about his life and at first presents very negative outlooks in conversation. However, after enough activities with Niko, Dwayne begins to act more positively and after Niko himself tells him to stop complaining and try to enjoy life, Dwayne finally begins to share some positive outlooks and hopes with Niko.

Despite being a drug dealer, Dwayne often shows signs of extreme kindness and altruism, especially to those closest to him. While incarcerated he pulled favors to make sure that his girlfriend on the outside was looked after and taken care of, even going as far to lavish her with cars and apartments and bank accounts. Dwayne took in Playboy X and served as a father figure to him, teaching him how to sell drugs and helping him build a criminal empire. If Niko chooses to kill Playboy X, Dwayne shows genuine sadness over his death, lamenting that he was "a good kid back in the day". 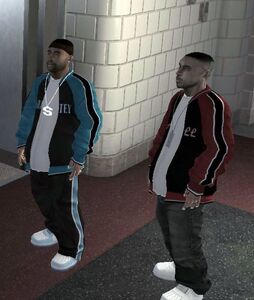 Dwayne's backup for Niko Bellic if the player calls for assistance. 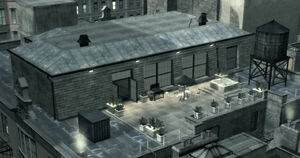 Dwayne Forge's house, given to Niko if Playboy X is killed.