Supreme sniffing skills
Ability to track any animal nearby just by scenting it
Ability to determine an animal's exact genus, gender, and approximate weight just by smelling them

Pesting control for profit and fun.

Kill RJ and the gang (failed).

Dwayne LaFontant, also known as the Verminator, is one of the two secondary antagonists (alongside Gladys Sharp) of DreamWorks' 12th full-length animated feature film Over the Hedge (which is based on the 1995 syndicated comic strip of the same name by Michael Fry and T. Lewis), and the main antagonist of the video game adaptation of the same name. He is Gladys Sharp's henchman and love interest.

In the film, Dwayne was hired by Gladys to exterminate RJ and his friends, only to be defeated when the Depelter Turbo stings the greedy bear named Vincent, Gladys, and himself. In the end, he manages to escape from the police, only to be bitten in the leg by Nugent upon climbing over a fence.

He was voiced by Thomas Haden Church, who also played the Sandman in Spider-Man 3, Lyle Van de Groot in George of the Jungle, Killer Moth in Teen Titans, Roach in Tales from the Crypt Presents Demon Knight, Quillgin in Regular Show, and Tal Hajus in John Carter. In the film's video game adaptation, he was voiced by Fred Tatasciore who also voiced Dennis in the The SpongeBob SquarePants Movie video game, The Mawgu in Nicktoons: Battle for Volcano Island, and King Fossa in Madagascar: The Video Game.

In the film, Dwayne is hired by Gladys Sharp as her main henchman to exterminate the animals.

One day, Dwayne arrived and tried to kill Ozzie (who faked passing out), but the possum got away and fled into the hedge. Shortly afterwards, Dwayne then smells Verne (whom he calls "Reptile") and bends over to capture Verne (who was under a car), but Verne had already escaped back into the hedge to meet up with the other animals.

Dwayne installs a high-powered extermination system in Gladys' backyard, knowing that she would insist on wanting it.

Later, after Gladys catches the animals in her house and gets sprayed by Stella the skunk, Dwayne arrives with his gas mask on to avoid odors and is able to capture the animals except RJ, who left to return the restored food to Vincent.

But when RJ sees Dwayne driving away with RJ's caged friends, the raccoon has a change of heart at the last moment and decides to go rescue them. The impact stuns Dwayne and frees the other animals, who turn the van around to go back home. Meanwhile, RJ is chased by Vincent atop the van. Verne eventually manages to convince the other animals that RJ's trying to help them and they all turn to help RJ defend himself from Vincent.

Without control, Dwayne's van eventually makes a jump and flies through Gladys' house. RJ, Verne, and the others flee into the hedge, with Vincent on one side trying to claw them and Dwayne (who uses a cattle prod to shock the animals) and Gladys (who uses a weed hacker) on the other. RJ and Verne then have an idea, and have Hammy drink some soda and he causes the whole world to freeze.

After that, Hammy walks into Gladys' backyard, activates the new extermination system called the Depelter Turbo, and then gets an idea and puts a little garden gnome behind Dwayne's foot. RJ, borrowing Verne's shell, uses himself as bait to lure Vincent into Gladys' backyard. Dwayne, Gladys, and Vincent fall into a pile as the Depelter Turbo comes online (due to them falling into the lasers), zapping them all and imprisoning them in a cage.

Gladys and Dwayne are arrested for illegal traps. While Gladys fights the cops and beats them up, Dwayne quietly escapes and climbs over a fence, only to be bitten on the leg by Nugent after stepping on one of the Rottweiler's squeaky toys.

It is unknown what happened to Dwayne after the events of the film, but it could be possible that the police eventually found and arrested him and Gladys.

Over the Hedge: The Video Game

Dwayne appears in the film's video game sequel as the main antagonist. Here, the forest animals refer to him as "the Sniffer" due to his ability to find animals by sniffing their scent. The start of the game covers what happened at the climax of the film, but the difference is that when the Depelter Turbo is activated, Dwayne is the only one to avoid getting zapped and imprisoned by the machine. When Dwayne tries to figure out what caused the Depelter Turbo to trap Gladys and Vincent, he ends up annoying Gladys who fires him. Unlike in the film, Dwayne and Gladys aren't arrested for using the Depelter Turbo. Because of this, the game serves as an alternative sequel.

The next time the animals encounter Dwayne is when they steal food from the Martin residence. Because Dwayne's truck is far away from them, the animals assume that Dwayne will never notice them until he takes out a set of binoculars and spots the animals. He parks his truck right next to the group and fires the vehicle's weapons at them, but he is forced to leave when the animals destroy the weapons. After stealing food from the Smith residence, the animals once again encounter Dwayne whose truck now has more weapons. The animals succeed in destroying them again, and Dwayne is forced to leave again.

When the animals go to steal a satellite dish from Vincent the bear's cave, they learn that Dwayne succeeded in putting a mind-control cap on Vincent as well. After the animals defeat Vincent and remove the mind-control cap, they convince him to join them in their battle against Dwayne so he can have revenge on him. By joining the animals and befriending them, Vincent redeems himself. During the animals' mission to steal food from the Conner residence, Dwayne captures Lou, Bucky, Quillo and Spike and activates a set of moving lasers to stop the animals from rescuing them. While Dwayne goes to his truck to fetch mind-control caps for the porcupines, however, the animals are able to rescue their friends and head into the sewers to continue their mission.

After the animals successfully return from the Conner residence, they head for the amusement park to steal a cotton candy machine. While they're gone, however, Dwayne succeeds in capturing Heather. After Ozzie informs the animals of Heather's capture, they head for Gladys' new house the next day to steal Gladys' PDA to find the location of VermTech Institute, the university that Dwayne works at. After the animals acquire the PDA, they attempt to leave but are stopped by Gladys and Dwayne. After Gladys takes back her PDA, Dwayne heads for his truck to fetch some tools to kill the animals with. The animals, however, are able to escape when Ozzie takes control of a golf cart, prompting Gladys to steal Dwayne's truck to chase after the animals, much to Dwayne's disbelief and confusion.

After the animals retrieve the PDA and use it to reach VermTech Institute, they witness Dwayne chasing after Heather with the intention of placing a mind-control cap on her. Dwayne quickly succeeds in cornering Heather, and to prevent her from escaping, he seals off the hallway leading to the university's elevator.

After taking Heather to VermTech's underground laboratory, Dwayne demonstrates his mind-control machine to her using a rat, but before he can brainwash her, he notices RJ, Verne, Hammy and Stella entering the laboratory and decides to deal with them first. Dwayne not only summons brainwashed animals to attack the group with, but he also arms himself with two guns to fire fireballs, ice and ping pong balls at his enemies.

After the animals destroy the four mind-control machines scattered around the laboratory, they end up damaging the capping controller located above Dwayne's head and decide to damage it even more to finish off Dwayne. To get a better aim at the capping controller, the animals walk up two sets of ramps to reach the floor above, the ramps having descended as a result of the mind-control machines' destruction.

While firing his guns at the animals, Dwayne reveals that the floor above is not permitted without a key card, something even he lacks. This suggests that despite being VermTech's only known employee, Dwayne is not in charge of the institute. Once the animals land the finishing blow on the capping controller, it falls on top of the computers on the laboratory's control panel, trapping Dwayne underneath it. The destruction of the capping controller also starts a fire that sets VermTech ablaze. Dwayne is able to escape, and as the police and firemen arrive to put the fire out, Dwayne vows revenge on the animals, claiming that their feud is not over yet.

Dwayne is evocative, articulate, intelligent and overzealous. He is a conniving, manipulative, surreptitious, pertinacious and well-spoken person who takes his job extremely seriously. He will stop at nothing to exterminate RJ and his friends.

Throughout the film, Dwayne appears to have some sort of crush on Gladys and teasingly calls her "Nancy", so she will stop complaining.

The Verminator is on the job

Vincent with Gladys and Dwayne in Gladys' backyard.

Dwayne in the video game.

The Sniffer cornering Heather at the elevator.

It was a pleasure doing business with you, ma'am

These little guys will be disposed of quickly and humanely. 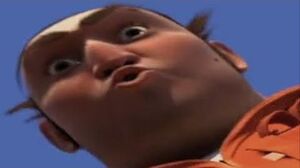 Over The Hedge, but just the Verminator 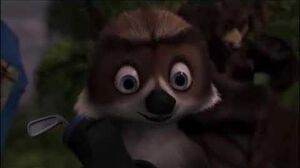 Over The Hedge - Bear Fight (HQ) 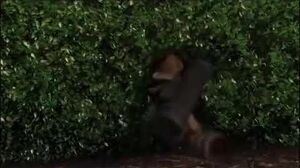