Showing off his buns

Dwayne is a skinny man with charcoal hair and buck teeth. He wears a blue shirt with bright brown overalls.

When Yakko gets ready to sing about Giuseppe Arcimboldo, Dwayne interupts them with the intent on selling them some of his buns. Upon presenting them, Yakko allows Dot and Wakko to own one. However, After giving the Warners some buns, Dwayne starts spreading the buns all across the studio, where they start multiplying.

Upon seeing the buns become too much hassle, the Warners decide to return the buns to Dwayne, who refuses to take them back and instead has to muscular rabbits take the Warners away.

After which, the buns he left in their watertower multiply to where they blow it up, prompting the Warners to actually fight Dwayne. When the buns prove too much for them, Wakko dials Australia to send dingoes to deal with the bun violence.

Upon their arrival, the dingoes buy back all the buns and take Dwayne away who rants about being a responsible bun owner. 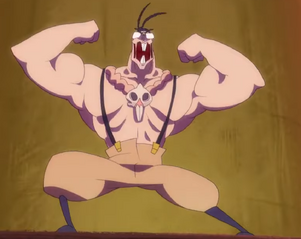