Conquer the universe via fear and suffering.

Demonic Mastermind
The Dweller-In-Darkness (sometimes shortened simply to The Dweller) is a demonic being from Marvel comics and one of the Fear Lords - monsters that feed off fear and occassionally join forces in order to increase fear levels across the universe and thus increase their own power.

The Dweller-in-Darkness was a demon shunned by his people for following "The Way of the Shamblu".  In the universe which existed before the current reality, the Dweller telepathically reached out to the minds of all life and united them in peace, foiling the Dweller's scheme. As the universe came to an end, the current universe was born, with its own incarnation of the Dweller.

In this new universe, when he first came to Earth, the Atlantean sorceress Zhered-Na discovered the existence of the Dweller and banished him with the help of Agamotto and the Atlantean god Valka. When Atlantis sank, the Dweller absorbed the fear of the inhabitants and used it to create D'Spayre and ordered him to kill Zhered-Na in revenge. D'Spayre manipulated a tribesman to kill Zhered-Na and Zhered-Na's student, Dakimh the Enchanter battled D'Spayre over the next millennia, while D'Spayre tried to generate enough fear on Earth to free his creator. During this time the Dweller created other beings with a similar purpose, including the demoness Spite. D'Spayre remained his most powerful creation though.

In the 20th century, his plan was stopped by the gods Thor and Hercules who fought the Shade Tralls and destroyed them. He also inspired Zolton Drago to become the first Mister Fear.

The Dweller created new Shade Tralls but not before the Dweller finally freed himself from his prison. Months later, the Great Fear started out as the Dweller had planned; several of the Fear Lords were destroyed by Strange and his allies, but Nightmare and the Dweller fought, but during their battle they generated so much fear that humanity stopped fearing and started to despair. The two were unable to feed upon this despair, but D'Spayre was and the Dweller attacked him, but D'Spayre destroyed the Dweller's robotic body. His head, the only living part of the dweller escaped.

The Dweller has the ability to sustains and empowers the Dweller, allowing him to generate even more fear. He also has other undefined mystical powers: he can create independent creatures made of shadow with superhuman strength. Strong light can kill or banish these tralls. The Dweller is immortal, does not age and even the sorceress Zhered-Na, assisted by powerful beings like Agamotto and Valka, could only banish him, not destroy him. 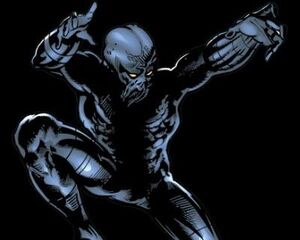 The Dweller (also known as The Dweller-in-Darkness). 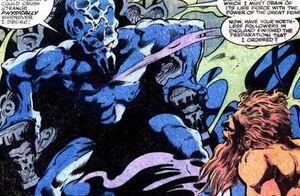 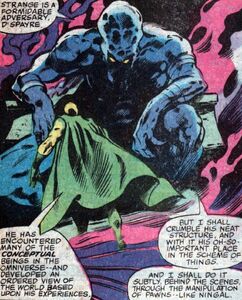 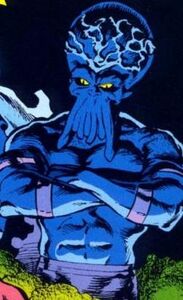