Master to the Soul Eaters

Absorb as many souls as possible (briefly succeeded).
Kill the Great Protector and Shang-Chi.
Destroy Ta Lo and reach Earth (both failed).

The Dweller-In-Darkness is the overarching antagonist of the 2021 Marvel Cinematic Universe film Shang-Chi and the Legend of the Ten Rings.

He is a draconic alien that invaded Ta Lo with his army of Soul Eaters to ravage the land. After years of war with Ta Lo's people, the Dweller-In-Darkness was eventually defeated and sealed in a mountain.

He would spend centuries luring people into Ta-Lo and tricking them into attempting to release him by fooling them into believing that their deceased loved ones were trapped behind the gates that keep him sealed. It is the Great Protector's archenemy.

He was voiced by Fala Chen with Ying Li's voice.

The Dweller is an alien taking the form of a reddish-beige dragon with multiple tentacles. When empowered by the souls absorbed, he glows purple.

Millions of years ago, the Dweller invaded Ta Lo, along with its army of Soul Eaters, ravaging the village. After years of war, he was defeated and sealed into a mountain behind a magical dark gates.

The Dweller plotted to lure humans into Ta Lo by imitating the voices of their deceased loved ones, making them believe that breaking the dark gates would bring their loved ones back to life. According to Ying Nan many people have reached Ta Lo intending to open the gates but all those attempts ended in failure as the residents of Ta Lo always stopped them. Eventually the Dweller turned his attention to Xu Wenwu, a man who carried a set of ten magical rings which had enough power to destroy the dark gate. The Dweller began his usual manipulation tactic making Wenwu hear his dead wife Ying Li's voice in his had, asking it to open the gate.

Xu Wenwu, believing the Dweller's lies and desperate to restore his family, had his terrorist organization the Ten Rings begin to plan to invade Ta Lo thinking they are freeing Ying Li. The villagers of Ta Lo alongside Xu Wenwu’s children Shang-Chi and Xialing and Shang-Chi's friend Katy Chen began preparing the attack. When the Ten Rings arrived in Ta Lo Ying Nan and Wenwu's children tried to convince it that the voices in his head were a trap but Wenwu refused to listen. As Wenwu and Shang-Chi fought, Wenwu managed to damage the gate that sealed the Dweller which freed some of the Soulsuckers and they began stealing souls. The Ten Rings and the villagers chose to work together after a Soulsucker stole the soul, of a high member of the Ten Rings, Death Dealer. 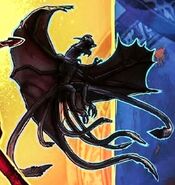