Eidolon of the Blind

The Dweller in the Gulf

Immortality
Ability to see without eyes

Force all it encounters to worship it

Removing the eyes of its followers

The Dweller of the Gulf is a villain from the Cthulhu Mythos, appearing only in Clark Ashton Smith's short story of the same name.

The Dweller in the Gulf is an alien creature (speculated as one of the Great Old Ones) native to the planet Mars. It lives in subterranean caverns, where it is worshipped by a sect of Martians who routinely summon it by rubbing an idol known as the Eidolon of the Blind. All of the being's worshippers are blind, the Dweller having removed and consumed their eyes. Rubbing the idol causes a strange, drug-like ecstasy in whoever touches it. While all the worshippers are thus intoxicated, the Dweller claims one as a sacrifice. It removes their eyes and eats them, adding them to its worshippers.

The Dweller in the Gulf resembles a giant tortoise with a dozen short legs. It is the colour of white gold, eyeless, possesses a twin tail, and from the corners of its mouth protrude a pair of yard-long proboscises which it uses to remove and consume the eyes of its prey, in the process turning them into its blind servants. 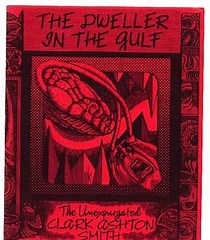 The Dweller on the book cover