Create a 500-person centipede out of prisoners. (succeeded)

Dwight Butler is the villainous deuteragonist of the 2015 film The Human Centipede 3 (Final Sequence). He is the right hand man of the film's villainous protagonist Bill Boss and works with him to make a 500-person "human centipede" out of prisoners.

He was portrayed by Laurence R. Harvey, who also played Martin Lomax in The Human Centipede 2 (Full Sequence).

Dwight Butler is the accountant and ally of warden Bill Boss at the George H W Bush prison in Texas. When the inmates become out of hand, to the point of disrespecting prisoners and even Bill Boss himself, Dwight comes up with the ideal punishment of putting them inside a Human Centipede (as inspired by the films of the same name) which he thinks will make people think twice about committing a crime in fear of becoming part of it. He shows Bill the first two Human Centipede films, however Bill shows his dislike for it, opting for more old fashioned torture methods such as mass castration and hot water boarding.

When Bill's methods don't work on the inmates, Dwight convinces him to consider his idea. They invite the Human Centipede films' writer and director Tom Six to pitch the idea, and he approves for the prison to use his idea as punishment.

When the operation is complete an a 500-person prison centipede is created, Governor Hughes is invited to see it. Hughes shows disgust at the concept, and states that Bill and Dwight should receive the death penalty. Bill plots to kill Dwight and himself, and even shoots the head doctor of the operation. However Governor Hughes changes his mind, feeling it was exactly what America needs. Dwight is happy that his idea was a good one, but wasn't able to keep his victory for long as Bill shot him in the head, as he didn't want Dwight taking all the credit. Bill then places the gun next to Dwight's body, to give the impression he committed suicide. 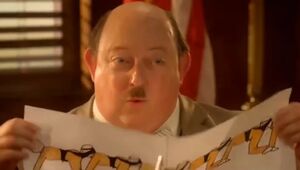 Retrieved from "https://villains.fandom.com/wiki/Dwight_Butler?oldid=4336475"
Community content is available under CC-BY-SA unless otherwise noted.