Villains Wiki
Register
Don't have an account?
Sign In
Advertisement
in: Criminals, The Simpsons Villains, Comedy Villains,
and 21 more

Going to the amusement park where his mother abandoned him.

Be with Marge (failed).

Dwight David Diddlehopper is a criminal who robbed a bank and a minor antagonist in The Simpsons, appearing in the episode "I Don't Wanna Know Why the Caged Bird Sings".

While waiting in line at the First Bank of Springfield, Marge meets Dwight and talks to him about how long the wait is. But shortly after Dwight and his unnamed accomplice pull out guns and start an armed robbery. After the police have the building cornered and Dwight's accomplice bails after accidentally shooting Gil, Dwight tells Marge that if she visits him in jail, he'll surrender to the police. If not, he'll either get shot or commit suicide.

When Marge is on her way to see Dwight, out of fear she goes apple picking instead of visiting him. Dwight is enraged and breaks out of prison and searches for Marge. Then he holds her at gun point in her car threatening to shoot unless she takes him to the amusement park that his mother abandoned him at. While riding the Viking Boats, Chief Wiggum tries to arrest Dwight. While Chief Wiggum is in trouble, Dwight saves the day by jumping between the boats stopping the ride. In the end, Marge goes to visit Dwight in prison and he gives her a bar of soap with a dandelion in it. It also has a plan for Dwight to escape engraved on the back. Marge sadly informs him she can't help him, and Dwight lets her keep the token. 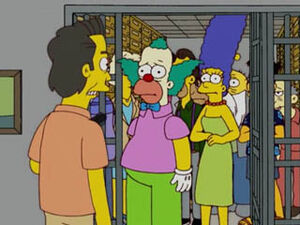 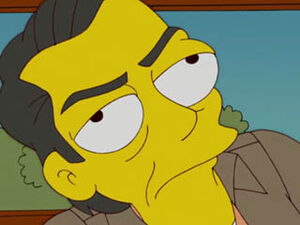 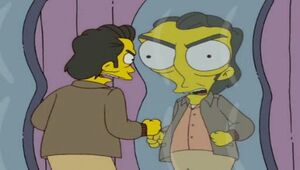 Dwight looking at the maniac mirror. 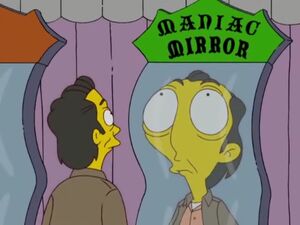