Performing sexual, and perverted moments towards men, women and zombies.

Get Nick to have "Fun" with him, or kill him (failed)

Jamie calls Nick, telling him he has spotted some weirdly dressed guy inside a South Almuda sex shop who doesn't look too much concerned about the outbreak. Nick Ramos heads to South Almuda and heads to the Sex Shop. Upon entering, Nick goes down to the basement of the store and sees Julia Slyde and Eric Martinez strapped to two armchairs with their lips tied. Nick approaches them saying that he will do nothing to them, but accidentally stumbles over several cables. On the elevated platform, Dylan watches Nick telling him that he has just entered and is already starting to show his "goodness". Nick replies not to get so excited, and an aroused Dylan tells him to do various erotic and sexual acts solely for his own pleasure, such as pole dancing, and then he goes down the pole showing Nick his outfit. Nick declines, telling Dylan that he is in no mood for such things. Visibly annoyed, Dylan threatens Nick not to open the door until he becomes more submissive, then releases his launcher, which looks like a giant penis, a huge blast of fire to "convince" him. Seeing that this also does not convince Nick, she decides to attack him.

Dylan primarily attacks using the flamethrower, especially in spurts and spin cycles-the latter tactic sometimes aided by his stripper pole. He will also utilize the weapon's snowball cannon feature, which can hit Nick or his hostages with a stream or shot of concentrated ice. If left alone long enough, Dylan will assault and torment his hostages, which can kill them unless Nick intervenes.

After the fight, the defeated Dylan starts giggling and complaining about Nick's poor performance and the fact that he caused him great pain, and then falls to the ground. Its launcher lets out one last light blast of ejaculation fire. Nick looks away in embarrassment and Dylan dies with a huge smile on his face. After killing Dylan, Nick can save Julia and Eric. 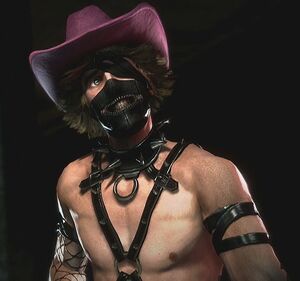 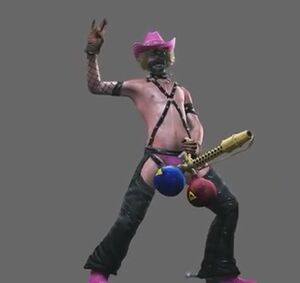 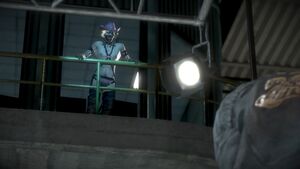 Dylan looking at Nick from above. 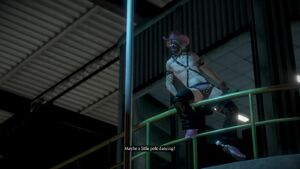 Dylan about to slide down on a pole. 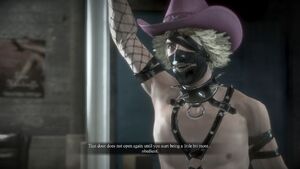 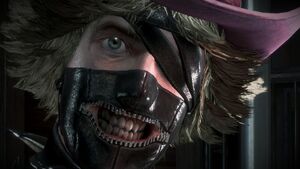 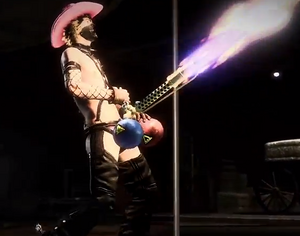 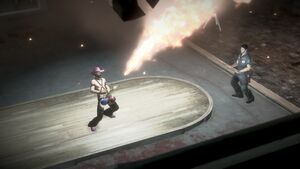 Dylan demonstrating his weapon to Nick. 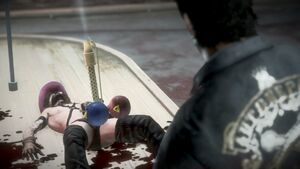 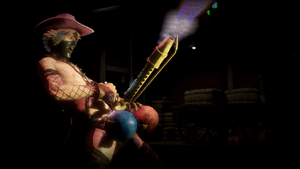 Dylan Fuentes as as the Lusty Psychopath.
Polski
Community content is available under CC-BY-SA unless otherwise noted.