To simply eliminate all forms of crime.

Dynomutt X-9, also known as DM X-90 Crime Elimination Unit, is an advanced crime fighting canine android created by Dexter as a replacement for the heroic Dynomutt to be the Blue Falcon's new sidekick.

He was voiced by Frank Welker, who also played Dynomutt.

After Dynomutt temporarily restored and later deactivated due to "being bad as Deedee" as described by Deedee's brother Dexter because his gullibility, Dexter himself decided to create a new partner for Blue Falcon.

Dynomutt X-90 was constructed and was fully ready for duty, but, as expected from many a botched-up experiment Dexter makes, due to its violent and tremendously strict enforcement of the law such as jaywalking and littering, Dexter and Blue Falcon were forced to destroy it. At the time, Blue Falcon was devastated, believing at first that X-90 was the rebuilt original Dynomutt, till Dexter revealed he was an all-new creation.

The real Dynomutt came to the rescue and used his feline disguise against Dynomutt X-90 in their one-on-one fight before launching a bomb (cleverly disguised as dog bone) which immobilized him and gave Dexstar (Dexter's superhero alter ego) the chance to deactivate him with a data processor chip. 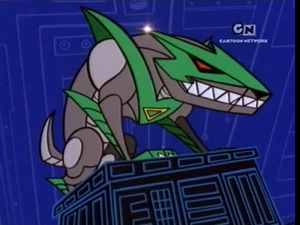 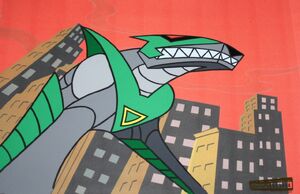 Retrieved from "https://villains.fandom.com/wiki/Dynomutt_X-90?oldid=3459175"
Community content is available under CC-BY-SA unless otherwise noted.