Prototype of the E-100 robots

Kill Amy after she escapes (failed).

It is a robot created by Dr. Eggman, as the first robot in his E-Series. He is a supporting antagonist for Sonic Adventure, and specifically the main antagonist and the only boss of Amy's story. He is Amy's archenemy.

Chronologically, E-100 Alpha's first appearance was in Amy Rose's story of Sonic Adventure. He was sent by Doctor Eggman to capture a bird known as a Flicky, which had a Chaos Emerald. Amy Rose decided to take care of the bird (who she unoriginally dubs "Birdy"), but Alpha arrived and chased Amy, but she evaded the robot by hiding in a restaurant. Alpha then tracks down the bird, who is accompanied by not only Amy, but also his creators arch-enemy, Sonic the Hedgehog. Amy enters the nearby Twinkle Park, with both Sonic and Alpha in pursuit. Although it fails to capture the bird and hedgehog in the Twinkle Park, he does manage to capture them as they exit the park and it takes them to the Mystic Ruins, with Sonic tailing them. However, Alpha is beamed up into the floating fortress, the Egg Carrier, where he delivers his captives to a prison cell. After being freed by a malfunctioning E-Series robot, E-102 Gamma, Amy Rose escapes into the Hot Shelter portion of the Egg Carrier, where Alpha again gives chase. He fails, but Eggman still manages to get Birdy's Chaos Emerald when they get to the surface of the flying battleship. Alpha, even though Birdy does not have the powerful gem anymore, Alpha still chases it when Amy as she traverses through another of Robotnik's bases, the Final Egg. Then, on the crashed Egg Carrier, Alpha hits and knocks Birdy to the ground as it reunites with its family. Amy then goes into the rage and destroys Alpha by knocking it into an electrical gate with her massive Piko Piko Hammer, and then hitting its core.

During the gameplay, Alpha will constantly chase Amy throughout all of her levels. He will smash through walls, windows, mirrors, and crates to get the player. He can shoot his fists at the player to harm them, killing them if Amy has no more rings left. Amy can stun Alpha temporarily by hitting him with her hammer and he cannot chase after Amy at certain points. However, Alpha cannot be killed during normal play, unlike in the boss fight.

A robot with the exact same appearance as E-100 appears in Sonic Advance 2, serving as an obstacle for the characters during the Special Stages. However, it's unknown whether it's the original Alpha rebuilt or a different robot made in his image. 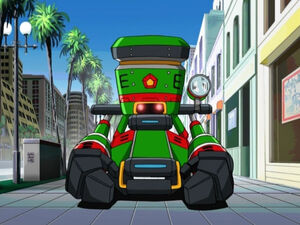