E.N.D. (ＥＮＤ, in Japanese: イーエヌディー, Ī Enu Dī) (real name: Etherious Natsu Dragneel (エーテリアス・ナツ・ドラグニル Ēteriasu Natsu Doraguniru), is the original identity of Natsu Dragneel, the main protagonist of Fairy Tail manga/anime series, who is later reborn as an Etherious by his older brother, the Black Wizard Zeref Dragneel. Originally Natsu who died 400 years ago, he was later revived as Zeref's most powerful Demon, thought to be strong enough to kill even the immortal wizard himself.

E.N.D. is said to be the most cunning and vile of Zeref's creation but it turns this was a false story created by members of Tartaros who were unaware of the demon's true personality. When awoke, E.N.D. possesses the single minded desire to kill his creator/older brother and speaks of nothing but that. However, parts of the demon still retains some of Natsu's personality traits such as the desire to protect his friends which was shown when he attacked Dimaria Yesta to save Lucy from being tortured. He also wanted to defeat Zeref due to thinking Lucy to be dead after he rescued her.

400 years ago, Natsu was born as the younger brother of Zeref, however, he died at a young age alongside their parents, courtesy of a Dragon attack. This caused Zeref to research Magic and its relation to life and death and, much later, with Zeref using his dead body, he was revived as the strongest Demon: E.N.D; whose purpose was to kill Zeref. As E.N.D., Natsu was a Demon specializing in fire, and purportedly discovered a different route that Magic could take when it was still developing and thus created Curses. During this time he also met Igneel, however the Dragon chose not to kill him because he loved him extremely so.

From that point on, Igneel, the mighty Fire Dragon King, taught Natsu how to talk, write, and perform his own signature form of Lost Magic: Fire Dragon Slayer Magic; Igneel ultimately chose, like four other Dragons of that time period, to seal his damaged soul inside Natsu's body and leap four hundred years into the future, recover his strength with the future's high Ethernano concentrations and kill Acnologia. While initially thought to have been abandoned by Igneel on July 7, X777, it was actually the day and year he awoke in the future, like the other four Dragon Slayers.

The departure of E.N.D. from the past also gave rise to many legends about the strongest Demon from Zeref's works, including his creation and leading of Tartaros (when in fact, Mard Geer happened upon E.N.D.'s tome and used it to unify the other Etherious under a single cause and was the one who created Tartaros), and the fact that he was the most vile creation in Zeref's library of works.

E.N.D. is stated to be Zeref's most powerful creation and the only one capable of slaying the Black Wizard. Silver Fullbuster later reveals to Gray that E.N.D. is a Fire-type Demon. This demon has the ability to move while time is suspended as shown when he was able to defeat Shield of Spriggan Dimaria Yesta who couldn't believe the demon had power to defy the power of the gods. He is said to be so powerful that even the Dragon King, Acnologia has a fear of this Fire Demon. When E.N.D. fought Gray, E.N.D. and the Devil Slayer were on par with each other meaning that this demon's strength partially depended on how strong Natsu is. E.N.D.'s power is also able to defeat a full grown, all powerful dragon like Animus who's power was amplified by the Dragon Cry staff.

Believing E.N.D. to be in a "dormant state", Tartaros planned to use a weapon called Face to wipe out all Magic from the continent so that they can gather Curse Power in order to revive their "Master". They would then with their Master return to their creator Zeref.

Mard Geer is seen on his throne holding E.N.D.'s tome as he talks about Zeref's Demons, the Etherious: beings superior to humans. Seemingly reassuring the Master, Mard Geer states that the darkness of Hell's gate will soon appear and eat up the world's light.

Following the destruction of Face, Kyôka reports to Mard Geer, urging him to consider reviving their Master to assist them. However, the Underworld King informs her that there is too much Magic Power present in the world for E.N.D. to properly resuscitate, and, though Kyôka reminds him that that was the entire point of using Face, he states that their plans will still come to fruition.

Some time later, Zeref reappears after Mard Geer's defeat to interrupt the argument between Natsu and Gray on who takes the book of E.N.D. He summons the very book to his hand, claiming that it is something very important that belongs to him. Zeref then praises Mard Geer for his attempts to revive E.N.D and when Mard states that he can realize what Zeref wishes for, the Dark Mage turns his Demon into a book, burning it subsequently. He then vanishes yet again, taking E.N.D. with him as well.

Later, at an unknown place, Zeref ominously remarks that Natsu has to try and overtake him, calling the Dragon Slayer "Etherious Natsu Dragneel" revealing that Natsu is the demon.

During a fight between Zeref and Natsu, the latter reveals his relationship to Natsu and the dragon slayer's status as E.N.D. . Though Natsu refused to believe it at first, he was forced to believe it after Zeref pierced a hole through the book of E.N.D. and Natsu ended up hurt as a result which proved the latter's story. After Zeref reveals what really occurred in the past, Natsu lost his patience and attempted to kill his brother as he was told that if Zeref dies it would mean his own death as well. Natsu ignored this and declared his intentions of wanting to kill Zeref only for Happy to stop him and fly away with him.

Natsu and Lucy are then captured by one of the Spriggan 12 Dimaria Yesta who spent her time torturing Lucy as Natsu remained unconscious. Just when Lucy was about to have her eyes stabbed out, the power of E.N.D. is then unleashed inside Natsu and allowed him to break free of his constraints, completely able to move in Dimaria's time stopping magic and brutally attack her saving Lucy. After defeating Dimaria, Natsu/E.N.D. went to check on Lucy but after failing to awake the unresponsive Lucy (who was still affected by Dimaria's magic) he breaks down which causing his instincts and powers to possess him. He escapes the chamber and starts hunting Zeref as he pinpoints the latter and he begins to make his move only to be confronted by Gray. Gray and E.N.D. mercilessly attack each other without any hesitation. The Devil Slayer and The Fire Demon seemed evenly matched until they were stopped by Erza. Erza made the two come to their senses and Natsu's demonic transformation diminishes.

Some time later, Mavis managed to obtain the Book of E.N.D. She then met up with Lucy, Happy, and Gray and lend them the book. Happy points out it's Natsu's book and Lucy realizes that she was holding Natsu's life in her hands. Mavis then leaves them to work on a plan to beat Zeref. Lucy, Happy, and Gray then sit on a bench looking over the book. They soon decide to open the book and when they do Letter magic flows out of it. Lucy is then shocked about what it says.

Lucy then tries to rewrite the words in the book but becoming effected by the books dark magic. Gray then help's her get through the pain and continues to rewrite the book. The book's changes effect Natsu during his fight with his brother, Zeref. The changes give Natsu the edge he needs to defeat Zeref.

Later, Zeref dies peacefully with Mavis and due to the book's link with Zeref it disappears. When the book disappears Lucy claims that she has done all she could to help Natsu and worries that Natsu may have disappeared along side with the book. However, Natsu shows up where Lucy and the others are saying the fight is over.

Around that moment, Acnologia managed to escape the Time Lapse and with it's magical power he pulls all the Dragon Slayers into the Ravines of Time where Acnologia faces the former demon. However, this caused Gray, Happy, and Lucy to believe that Natsu disappeared because of his link with his now deceased brother, Zeref. This belief caused Lucy to drop to her knees crying believing that Natsu is gone forever, not knowing that he is still alive well along with other 6 Dragon Slayers facing Acnologia's human form in the Ravines of Time, while the Black Dragon's dragon form came out from that ravine along with a weakened Ichiya and Anna Heartfillia instead of his human form, despite linking their minds and lives, and the form is coming to destroy Magnolia. As Lucy found the Fairy Sphere magic guide book Mavis left behind, then Meredy uses her Link Magic to connect every Fairy Tail's allies who are far from Magnolia, the Fairy Tails and their allies uses their bonds to strengthen the Sphere's seal on Acnologia's dragon form, affecting his human form as well for Natsu to finish off Acnologia for good, as the dying Black Dragon soon praises Natsu to be worthy to inherit Dragon King, but Natsu happily denies it despite Acnologia's acknowledgement towards for his peaceful desire to be with his friends. As the war is over, Natsu and the 6 Dragon Slayers are return to the real world safely. 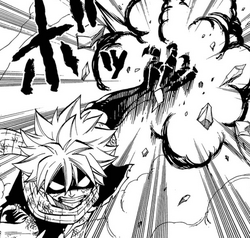 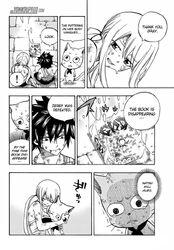 The Book of E.N.D. disappears.

Natsu's E.N.D. form in the anime
Add a photo to this gallery

Retrieved from "https://villains.fandom.com/wiki/E.N.D.?oldid=2473706"
Community content is available under CC-BY-SA unless otherwise noted.