Abduct scientists all over the world and force them to design state-of-the art arsenals.

Once those arsenals are designed put them into production and use those weapons to conquer the world.
Kill Flint Rickman.
Reclaim Mary Bates and kill her if she cannot be retrieved.

The EKKL Empire are the main villainous faction from the 1994 arcade game Rail Chase 2.

The game's time takes place in 1938 A.D. In the game, the EKKL Empire kidnaps a prominent scientist named Mary Bates. The EKKL Emperor holds her in his base forcing her to develop weapons so he and his army could conquer the world with their military might. A Journalist named Flint Rickman sets out to rescue Mary, but when the empire's weapons plant explodes, the pair are forced to escape EKKL in a runaway rail car!

During many levels of the game, the EKKL Empire's army soldiers appear all over, trying to shoot Flint and Mary while riding in rail cars, airplanes, army jeeps and other vehicles. Flint and Mary must shoot many enemy soldiers as they could to avoid getting shot and so could escape. And while they are at it, they have to choose several different and complex routes to determine what escape routes are best for them. In shrine stage (stage 3) EKKL contacts Caterpillar-war machine and dispatches it at the end of the stage in an attempt to intercept the escaping couple, but fails.

During the final level of the game, the EKKL Empire unleashes its most powerful weaponry that is a giant armored battleship-like train. Its existence had been kept in extreme secrecy and Mary was part of designing and building this behemoth. The EKKL's final arsenal tries to shoot Flint and Mary. After a long shooting battle between the pair and the EKKL Empire, Flint and Mary manage to destroy the Empire's train and get away from him and his army. Flint and Mary are then picked up by a rescue plane at the end of the game. 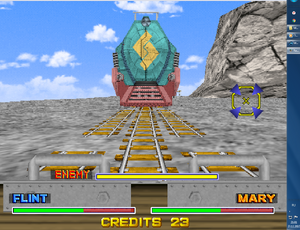 The EKKL Empire's Armored Train chasing after Flint and Mary. 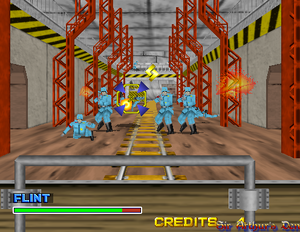 Some of the EKKL Empire's soldiers. 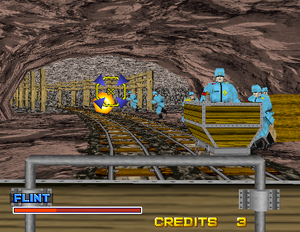 EKKL Soldiers in the Mine level.
Add a photo to this gallery
Retrieved from "https://villains.fandom.com/wiki/EKKL_Empire?oldid=4216340"
Community content is available under CC-BY-SA unless otherwise noted.