Conquer the universe and kill Kirby and Meta Knight.

He was voiced by Banjō Ginga in the Japanese version, and by Andrew Rannells in the English dubbed version.

In the anime Kirby: Right Back at Ya!, Nightmare runs a business called Nightmare Enterprises or N.M.E., a business that specializes in selling monsters to its clients. King Dedede happens to be one of his clients and is always ordering new monsters to get rid of Kirby and every one of those monsters ends up failing. The king never has the money to pay for any of these monsters and ends up eventually building up a massive debt that Nightmare keeps reminding him of.

In the short movie, Fright to the Finish, Nightmare himself, the head of N.M.E., is fought and defeated by Kirby after Meta Knight leads an attack on the N.M.E. base. In the battle, Kirby ran out of power as all his weapons were useless against Nightmare, and Nightmare entered Kirby's dream to give him a nightmare. When Kirby inhaled the Warp Star, he became Star Rod Kirby, and used the Star Rod, Nightmare's only weakness, to attack him. Nightmare was disintegrated.

Nightmare is referred to as NME (or eNeMeE) in the English dub of the anime. Not only is this the initials for Nightmare Enterprises, but sounds like the word "enemy".

Likely because the Kirby anime was meant to coincide with the release of Kirby: Nightmare in Dream Land, Nightmare is the main antagonist in Kirby's anime series, despite actually appearing in only nine of the one hundred episodes. He is referred to as eNeMeE in the English dub of the anime. Instead of attempting the conquest of Pop Star by corrupting the Fountain of Dreams, this version of Nightmare is intent on universal conquest through more direct, forceful methods. He is responsible for the creation of Nightmare Enterprises, which manufactures and sells hordes of monsters that Kirby often has to fight. It's implied that the monsters eventually turn on the customers he sells them too as well. The money he makes from it also goes to further his conquest goals. There was a time when the Star Warriors and Galaxy Soldier Army stood in his way, but his army of monsters wiped them all out except Meta Knight, Kit Cosmos, Sir Arthur, Sir Falspar, Sir Dragato, and Sir Nonsurat.

It's mentioned by Kabu that Nightmare created one monster that didn't obey him, though who it is never stated. This is heavily implied to be Kirby, but it is possible that it might also be Meta Knight, who also seems to hold a grudge against Nightmare, as Kirby wasn't even born yet while the great war was going on.

Nightmare rarely interacts with anyone and spends his time alone. Occasionally, Nightmare speaks to Customer Service concerning their business, but mainly exists as a mysterious figurehead of the company.

Throughout the series, Nightmare is seen simply watching Kirby and Dream Land, and never seems to take Kirby for a threat. He constantly watches Kirby fight his monsters that he sells to King Dedede. One of the few notable actions was when he sped up the rate of an asteroid that was heading for Dream Land, which he seemed to mostly just do for his own amusement, as well as putting money in his pockets from his best customer: King Dedede. For the bulk of the series though, Nightmare resides deep within his planet-sized fortress creating monsters.

Towards the finale, Nightmare seems to decide to end his amusement with Kirby and sends some of his Destroya ships to kill him, but this also fails. Nightmare responds by sending another six, but these are destroyed by Meta Knight's battleship, the Halberd. Even when the Halberd heads towards his fortress, Nightmare still doesn't take it for a threat and attempts to stop them with one last monster called Heavy Lobster.

This last-ditch attempt fails, and the group (at this point consisting of Kirby, Tiff, Tuff, Meta Knight, Sword, Blade, a number of other Cappy Town residents, and other old friends of Kirby) manages to make their way into the fortress. During this time, Nightmare decides to finally confront them head-on. After a brief scuffle, Nightmare kidnaps Tiff to lure Kirby into a fight with him. Kirby takes the bait and, as Fire Kirby, tries to attack him, but his fire breath proves useless, and he exhausts himself. With Kirby unconscious, Nightmare then enters his mind to torment him before finishing him off. Tiff, who also ended up in the dream, tosses Kirby a dream version of the Warp Star, which he swallows and gains the Star Rod ability, the only thing capable of damaging Nightmare. Kirby harnesses the power of the Star Rod and sends a wave of cascading stars at Nightmare, which destroys him forever. However, the original Japanese version of the anime implies that he is not really gone for good, as he states that due to his nature as a living nightmare, he will always come back as long as fear exists in others' hearts.

Nightmare appeared to also be the real villain in the Kirby of the Stars pilot and to be the one who actually sends all the monsters at Kirby. In the end, he appears to attack Kirby and his friends with some kind of energy beam before Kirby wakes up and realizes that it was actually a nightmare. His appearance in the pilot is based on his original design in Kirby's Adventure, with small shoulder pads, a single jewel on his crown, and short horns.

eNeMeE is the strongest and most powerful villain in Kirby Right Back at Ya!; he possesses far greater abilities than any of the monsters that Kirby fights in the anime. Despite the lack of wings, he can fly at high speeds and is fast enough to outrun the Halberd. He can create an army of monsters, manipulate other peoples' minds, and even brainwash them; he can also enter other people's minds and give them nightmares. He has the ability to fire powerful blue lighting beams from his fingers. Just like in the games, he is also invulnerable to damage from anything but the Star Rod, as all other attacks, such as the Halberd's lasers and Fire Kirby's Fire Breath, are absorbed by the void underneath his cloak. 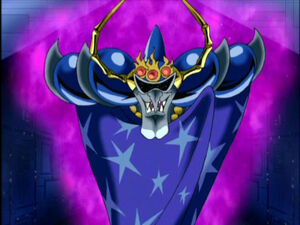