EV-A4-D, also known as A4-D, was a modified EV-series supervisor droid that served General Greivous as a medical/repair droid during the Clone Wars.

When Grievous arrived at his lair, he was ambushed by the Republic forces, resulting in a struggle that ended with the general's legs removed by Fisto's lightsaber and his faceplate damaged by blaster fire from clone troopers. Grievous was able to escape his assailants by brachiating away into the the castle's control room, where he was met by EV-A4-D. The droid reprimanded him for allowing the Jedi to get the advantage during the fight and informed him of his guard's deactivation. EV-A4-D left the general and began preparations for his repairs while Grievous remained in the control room to release Gor, who he hoped would be able to kill the intruders. Grievous was pulled away from viewing Gor's efforts by EV-A4-D, who was ready to take Grievous in for repairs. The medical droid began removing Grievous' damaged parts, replacing his severed legs with new limbs and painfully lifting away the general's face-plate.

Once he completed Grievous' repairs, EV-A4-D followed the general, who was confined to a chair while his new legs set in, back to the control room. EV-A4-D informed Grievous of an incoming transmission from Count Dooku, at which point the cyborg learned of the Count's deception. This, coupled with the death of Gor, pushed Grievous to hunt down the Jedi despite EV-A4-D's insistance that he take time to rest following his repairs. While Grievous left to combat Vebb and Fisto, EV-A4-D remained within the control room. While Grievous was dueling Nahdar, EV-A4-D cheered for the general. And before he could witness Grievous' victory, Kit Fisto sliced and destroyed the doctor droid.

Sometime after Kit Fisto's escape from the planet, EV-A4-D was rebuilt by Grievous. 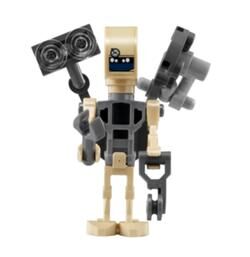