Leader of a group of Neo-Nazi mercenaries

Earl Danzinger is one of the two secondary antagonists (the other being Kimmy) in the 2016 movie The Purge: Election Year.

He was portrayed by Terry Serpico.

Danzinger is the leader of a Neo-Nazi paramilitary force who are employed by the NFFA to capture Senator Charlie Roan, who is successfully campaigning against the Purge.

Danzinger and his men are led inside Roan's house by Eric Busmalis and Chief Couper, two traitors inside Roan's security. Busmalis and Couper leads Danzinger's men to Roan's safe room but Leo, her chief bodyguard, has already escaped with the senator. The room is then blown up by hidden explosives activated by Leo. Danzinger survives but Busmalis is killed. While leaving the building, Danzinger finds that Leo has killed one of his men and injured another. Danzinger orders the men to be brought to the medical team and tells his men to search for the senator. He reminds them that their employers want the senator alive and that they need to find her before other Purgers do.

He then sweeps the area with a helicopter, searching for the escapees who he believes are on foot. He is unaware that Charlie and Leo have teamed up with other survivors and are on the move inside a van. He eventually finds the van by using a tracker located inside a bullet Leo took during his escape. He shoots the van with the helicopter's machine guns. One of the men inside the van is killed. To escape the helicopter, Leo orders the driver to head underneath an overpass. Unable to follow, Danzinger sends in his ground teams. Meanwhile, Leo pulls the bullet out of his shoulder to prevent Danzinger from following them. When Danzinger's ground team arrives underneath the overpass they only find the trace bullet. They are then slaughtered by purgers Leo and the group befriended. Danzinger hears their deaths through their radio. When he later arrives at the scene he finds only the bodys of his men. Back in his van he tells his men to access the city's surveillance system.

Eventually, he and his men manage to crash Leo's van and kidnap the senator. They then bring her to the cathedral Our Lady of Sorrow, where the NFFA members are celebrating their Purge. After the senator is delivered, Danzinger and his men leave the room to wait until the end of the Purge.

After Leo and Dante's men have saved the senator from the church they are attacked by Danzinger and his men in the parking lot. Danzinger engages Leo in a knife fight. During the fight, he is stabbed multiple times and severely injured. He gets up nonetheless but falls to his knees the moment after. Leo finishes him off with a kick to the head, which kills him. 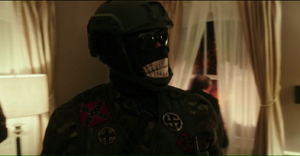 Earl taking off his mask.

Earl telling Eric no pay it less they find Roan. 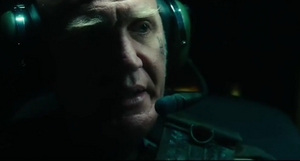 Earl scouts the area inside a helicopter. 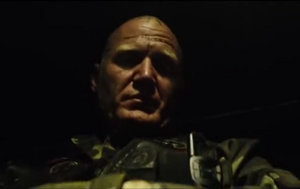 Earl in the parking lot. 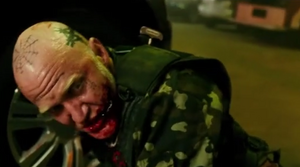 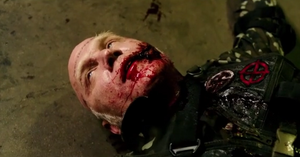 Earl's corpse.
Add a photo to this gallery

Retrieved from "https://villains.fandom.com/wiki/Earl_Danzinger?oldid=3422280"
Community content is available under CC-BY-SA unless otherwise noted.