Earlington Earl" Latimore is one of the supporting antagonists of the 2007 film Norbit. He is the third born son of the notorious Latimore family and youngest brother of Rasputia.

He was played by Clifton Powell, who voiced Big Smoke in Grand Theft Auto: San Andreas and Pinky in Next Friday.

Earl and his brothers were the meanest men in town who have been bribing and threatening people who even paid for protection and other things.

They met Rasputia's childhood sweetheart Norbit and welcomed him into their family.

Years later, he and his brothers tried to own Mr. Wong's orphanage where Norbit was raised and grew up there, and turn into their own stripclub called Nippolpolis to make money off of it.

They enlisted a fellow crook by the name Deion Hughes who was engaged to Norbit's old girlfriend Kate Thomas.

Fortunately, they all failed when Norbit stopped the wedding and even brought Deion's ex-wifes and their children as evidence of his deceit. The Latimores tried to kill Norbit for that, but they later being attacked by an angry mob of the very townspeople who have been harassed by the Latimores for many, many years.

Although the Latimores have gone to Mexico and opened a strip club there, Earl isn't last seen in the ending, but it can be presumed that he was obviously beaten by the angry townspeople while Big Jack runs away fast, leaving his brothers behind. 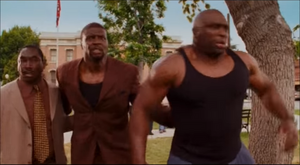 Earl and his brothers about to run away from an angry mob. 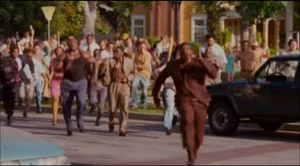