Being lazy.
Hanging out with Rusty.
Teaching Rusty.
Working.

Teach Rusty how to be a man.

Keep torturing and annoying certain characters also depending on episode.

Early Cuyler is the villainous main protagonist of the Adult Swim series Squidbillies. Despite being the main character of the show, Early had done some pretty questionable things through the show's run that sometimes feature him as the main antagonist.

He was voiced by Unknown Hinson.

Early is described as an insane ex-convict who is also described as an illiterate, foul-mouthed, and alcoholic individual. He drives a monster truck-boat-truck and his main weapon is a 12 gauge shotgun. He is the son of Granny Cuyler and the father of Rusty Cuyler.

A few years ago, Early met Krystal, a white woman and tried to provide her with a walkman. He did so by trying to rob a liquor store. The second time he attempted to rob the store, Sheriff caught him and sent him to prison which is where he remained for 15 years. It is soon discovered that Early had gotten Krystal pregnant since their last time together, and that Krystal sent their son Rusty over to him to raise him. Sheriff allowed him to raise him. Early eventually received a job from the Dan Halen Industries as the scapegoat for Dan Halen, the antagonist of Squidbillies.

Despite this, Early had been known to commit some crimes. For example, he robs the store several times and had also attempted illegal home projects such as whiskey brewing. He's also known to express his anger by using violence and is extremely easy to anger. He also often brutally harms his grandmother. For example, he once tried to get money from a trial case when Granny got into an accident in which he himself caused.

In a Christmas episode, Early and his family even captured Santa Claus and bludgeoned him. Early also killed all of the reindeer and made jerkey out of the meat and asked Santa if he wanted any. 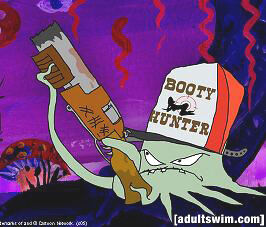 Early with his shotgun.
Community content is available under CC-BY-SA unless otherwise noted.