Can control animals (sewer vermin and extremely large alligators).
Is able to see in the dark.
Has elasticity where he can slip through the smallest of spaces due to his thin and supple physiology.
Has a larger and stronger physique after making a deal with Neron.

Earthworm is a supervillain in the DC Comics universe and an enemy of the Huntress, Guy Gardner (clone), Desmond, Veronna and Arisia.

Earthworm's past is unknown but its assumed he lived within the sewer system of Gotham City for most of his life. While initially only an adversary of the Huntress, his powers were greatly enhanced by a deal struck with the demon Neron and fought against Guy Gardner Warrior team-mates after attacking a popular night-club.

Although born Herbert Hynde, he came to be known as Earthworm due to his appearance and ability to control vermin and alligators found within the sewer system. Already involved in various criminal activities, he was the mastermind behind the purchase of infants born to couples willing to give up their children to feed their drug addictions. Earthworm sold the children to childless couples in return for greater amounts of money to fund a group headed by Terry Marsh who sought to have vigilantes like the Huntress destroyed. Interrupting a transaction in which a baby was being delivered to the Earthworm, the Huntress was able to track down Earthworm and dismantle the network needed to support his nefarious venture. Confronting him, the Huntress rescued another baby in his possession after battling alligators and rodents but unfortunately was unable to apprehend Earthworm due his ability to contort his body through a locked gate of bars nearby.

In the New World Universe, Earthworm was part of the group of villains who took up the demon Neron on his offer to greatly enhance their powers at the expense of their souls. Working with Cheetah and Blackguard, the trio attacked the popular Warrior nightclub and destroyed the establishment, Earthworm killing several patrons and employees to feed his hunger for "surface-meat". The clone of Guy Gardner was able to defeat both Cheetah and Blackguard but was unable to apprehend Earthworm who escaped to the sewers with several victims. The real Guy Gardner recovering elsewhere, team-mates Desmond, Veronna and Arisia arrived in Earthworm's underworld lair and were able to defeat Earthworm when Desmond transformed into the Black Tiger, allowing Arisia to cryogenically freeze the villain. It is unknown what happens to him afterwards but he is likely still in prison. 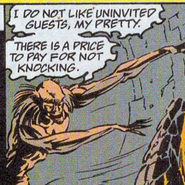 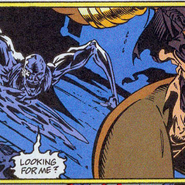 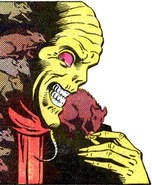 Earthworm with his rats

Earthworm after his deal with Neron
Add a photo to this gallery
Retrieved from "https://villains.fandom.com/wiki/Earthworm?oldid=3457587"
Community content is available under CC-BY-SA unless otherwise noted.