To serve Carlos (both formerly).
To serve E.B. and Fred O'Hare (currently).

One Easter, the chicks leader Carlos announces to his plan to overthrow the current Easter Bunny by the name of Mr. Bunny. Once Carlos puts his plan into action, the other chicks seize Mr. Bunny and tie him and a human named Fred O'Hare (who is accused of killing Mr. Bunny's son and heir E.B.) up in black licorice and place them above a vat of boiling liquid candy to be submerged in.

Suddenly, E.B. is alive and well, so he arrives and confronts Carlos, who orders the chicks to immobilize E.B. in gummy candy and place him on a chocolate bunny charving line. E.B. manages to use the charving blades to free himself and confront Carlos (who has become a chick-rabbit hybrid after holding the Easter Bunny's staff The Egg of Destiny, which can only be wielded by a bunny). After defeating E.B., Carlos prepares to escape the factory via the Egg Sleigh, which is pulled by several of the chicks. However, E.B. uses his drumming skills to cause Phil (the second-in-command of the Easter Chicks) to give the wrong take off signals, causing the Egg Sleigh to crash.

Following this, the chicks reform and serve E.B. and Fred O'Hare, who have become Co-Easter Bunnies. They are last seen pulling the Egg Sleigh with Phil as the new head chick and Carlos (still in his hybrid form) being made to pull the sleigh. 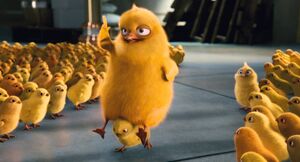 The Easter Chicks with Carlos, Mr. Bunny and the other rabbit workers. 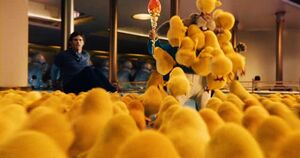 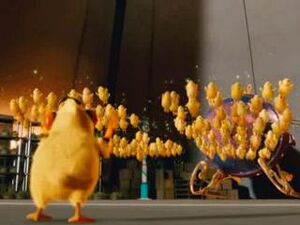 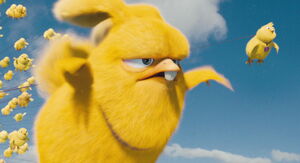